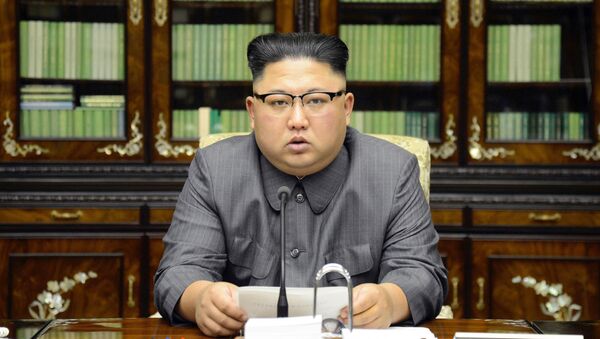 © AP Photo / Korea News Service
Subscribe
International
India
Africa
Sputnik spoke to Tom Harper, Doctoral Researcher in Politics, at the University of Surrey about meeting between South Korean delegation and with North Korean leader Kim Jong Un and what it could mean for north south relations and talks with the US.

A South Korean delegation will meet with North Korean leader Kim Jong Un on a visit aimed at encouraging North Korea and the United States to talk.

North Korea and the United States have expressed their willingness to enter negotiations However U.S. President Donald Trump, wants them to give up its nuclear weapons programme before discussions can begin.

Sputnik: How important could this delegation have an impact on relations between the two nations?

Tom Harper: Well judging by the differing approaches I think there’s been a bit of a divergence between the approach of South Korea and the US towards North Korea. The south seems to be a bit consolatory and there current government is a lot more consolatory than the government before it was. On the other hand you the US figures starting to take a more belligerent stance. For example we’ve had Senator Graham saying that a war with North Korea would be worth it. So two very different approaches to the same problem.

Sputnik: US want the north to stop nuclear weapons before any talks, how likely is this delegation going to achieve an outcome that will satisfy America?

Tom Harper: I think it will be more about the south, because on the one hand the US fear that if they develop more they could develop more, they could hit the mainland, its one thing to hit their allies but completely different were they to hit US Mainland. On the other hand the North will be very loathed to give them up as that’s there trump card presumably, that could deter any attack so there logic is that any hostile regimes that didn’t have nukes such as Saddam’s Iraq or Gadaffi’s Libya were invaded and that is one of their fears.

Sputnik: Could the upcoming joint military exercise next month have an impact on the talks?

Tom Harper: It could potentially be because there’s a lot tensions in the region and often these military exercises in the south are a way of saying sending a message particularly during the cold war. North Korea feels that’s a little too close for comfort so yes that could be on the agenda and in fact was the exercise that might give them more of an incentive to keep their weapons.