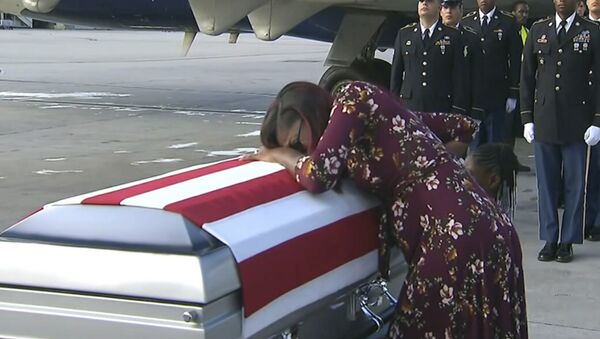 The Pentagon’s investigation into the deadly Tongo Tongo ambush in Niger that left four US soldiers and five Nigerien allies dead has revealed some disturbing findings. Reportedly, the American strike team did not receive senior command approval to undertake the risky mission after which they were ambushed.

The report comes courtesy of Stars and Stripes, which spoke to anonymous US military officials. The officials noted that the report did not claim that the failure to seek command approval was a cause of the ambush.

Since the October ambush, numerous contradictory reports have surfaced of the events leading up to it. Originally, the Pentagon claimed that the 12-strong US Army Special Forces team was accompanying 30 Nigerien troops to meet with tribal leaders along the Mali-Niger border, only to have the parameters of their mission changed midway through. In this version, they were reassigned en route to hunt for Doundou Chefou, an al-Qaeda affiliated militant who operated along the border, instead.

Now, the officials have claimed that the team told their commanders they were meeting with the tribal leaders, but instead altered the mission themselves and went after Chefou from the start. As a result, command could not accurately assess the mission's risk.

The October 4 ambush occurred near the village of Tongo Tongo along the border between Niger and neighboring Mali, about 120 miles from the Nigerien capital of Niamey. The US-Niger team were returning from an unsuccessful hunt for Chefou when they were attacked by a local Daesh offshoot, the so-called Islamic State in the Greater Sahara (ISGS).

The ISGS militants sprang an ambush on the US and Nigerien troops, opening fire on them with machine guns and destroying their vehicles with rocket-propelled grenades. The battle ended two hours later when French air support stationed in Mali arrived, sending the militants into retreat.

After the ambush, US Africa Command began to compile a report on the causes of the deadliest incident for US military personnel in Africa in a quarter of a century. The preliminary report was retrieved in February by the New York Times and it claimed that there were several "missteps" in the handling of the mission.

That report also claimed that a US commander in Niger changed the mission's parameters to the militant hunt — a claim the recent Stars and Stripes report directly contradicts. US forces in Niger are not authorized to enter situations where enemy engagement is likely and they would have needed senior command approval to do so from Special Operations Command in either Chad or AFRICOM's leadership in Germany.

Pentagon spokesman Army Col. Rob Manning said that the investigation into the incident was complete and the final report was being reviewed by Defense Secretary James Mattis. Beyond that, he had no comment.

AFRICOM commander Gen. Thomas Waldhauser is set to testify before the House Armed Services Committee on Tuesday, when he is expected to recommend greater oversight to ensure missions in Africa are properly approved and not too risky.

He may also push for better equipment, more heavily armored vehicles and improved lines of communications.

Another report claimed that Tongo Tongo villagers tipped ISGS to the US military presence when the team stopped in their village to rest and resupply. The investigation has neither confirmed nor denied that report.