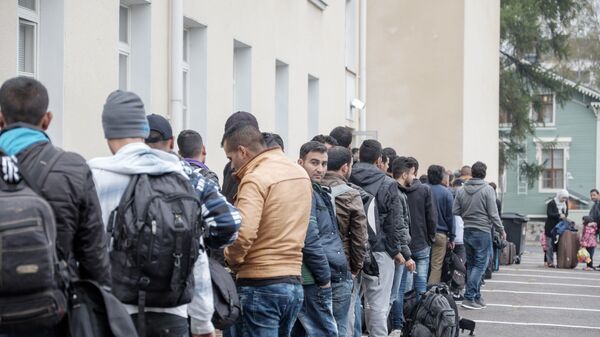 © AFP 2023 / PANU POHJOLA / LEHTIKUVA
Subscribe
International
India
Africa
In France, almost 80 percent of Iraqi asylum seekers were accepted in 2016. In Finland, which is more mindful of the refugee inflow, the corresponding figure was only about 20 percent, prompting Iraqis to go off the grid, raising legal questions.

Since 2015 over 6,000 asylum seekers have disappeared from Finland's immigration authorities' radar. According to the police estimate, about half of them chose other European nations in hope of getting asylum, in the light of looming deportation from Finland, national broadcaster Yle reported.

According to Yle, France is a particularly popular destination among Iraqi asylum seekers who were rejected by Finland due to its much more generous asylum policy. An unnamed French town in the vicinity of Paris has become a temporary home for dozens of Iraqis who were refused asylum in Finland and who hope to submit their applications anew in France.

Perhaps somewhat ironically, they took the same route as they did on their way to Finland, but in reverse: northwards to the border town of Tornio, across the border to Sweden, south to Denmark and onward.

"Finland decided that Iraq is safe for us. This is crazy, we cannot return to Iraq," an anonymous Iraqi asylum seeker told Yle, referring to a resolution by the Finnish Migration Board (Migri) that lists parts of the Middle Eastern country as "safe," and greenlighting the deportation of rejected asylum seekers. By his own admission, he is now afraid his family will be sent back to Finland.

No Means No: Court Denies Adoption of Adult Iraqi Man by Finnish Lady
Under the Dublin Regulation, it should not be possible to resume the asylum process in another EU country once a negative asylum decision has been received. Asylum seekers are supposed to be returned to the country where they submitted their first asylum application.

However, France is known for not always following the rule. In a case reported by the Finnish Hufvudstadsbladet daily in late January, a French court stopped the deportation of an Iraqi national to Finland, citing difficulties for Iraqis hoping to obtain protection in Finland and the risk of being sent back to Iraq. Similar rulings were passed in other cases concerning Sweden and Norway. Swedish Radio reported of several Afghans who after receiving negative decisions in Sweden were able to apply again in Italy.

Some of the organizations and activists that have previously helped asylum seekers with food, shelter and legal assistance and staged anti-deportation protests are now offering help to Iraqis hoping to leave Finland and seek asylum in another European country, Yle reported.

"There is a system for this. We are a link in the system," an anonymous activist told Yle. By her admission, taking an asylum reject to France costs several hundred euros. "Now, three more are on their way. Many of us have collected money for them," she said, citing help from fellow Iraqis with travel arrangements and maps. "We sometimes have a [asylum seeker] family staying at our country house until everything is settled. They didn't dare to stay in their homes after receiving the negative decision and were afraid that they police would do away with them."

Refugee organizations in France confirmed to Yle that an influx of Iraqis and Afghans from the Nordic countries to France is happening. According to Yle, several Iraqis who moved to France from Finland have been able to re-start their asylum process. Others, however, proceeded to live in France without documentation.

During the 2015 migrant crisis, Iraqis constituted the largest percentage of asylum seekers entering Finland. In the past two years, over 20,000 Iraqis sought asylum in Finland, as opposed to some 10,000 Iraqis residing in the Nordic country before the migrant crisis.