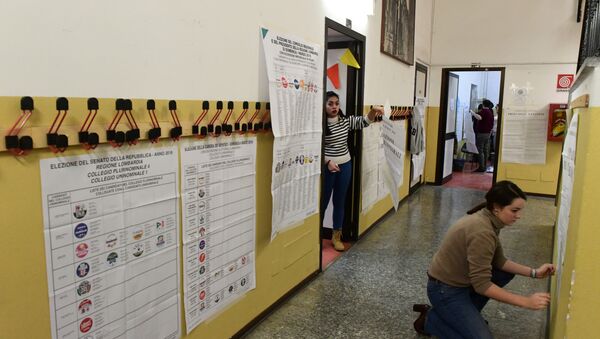 A survey by Techne — an Italian research and polling agency — has revealed that 60 percent of Italians aged 18-30 voted for anti-EU parties.

#Italyelection2018 Results Map
5 Star takes ALL of the poorer South, which has taken the brunt of the massive illegal immigration from Hillary/Obama destroyed Libya.

​Coalition talks are ongoing, but President Sergio Mattarella will ultimately decide which coalition will govern the country.

On March 5, Brothers of Italy candidate Roberto Jonghi Lavarini told Sputnik that a right-wing coalition would strive for good relations with Russia and Eurasia.

"The future center-right government will be friends with Russia, will work on lifting the economic sanctions and resuming a privileged dialogue with President Vladimir Putin and the Eurasian world," Roberto Jonghi Lavarini told Sputnik.

Many European populist parties have seen their support base grow across all age brackets, arguably due to the influx of migrants into Europe, and the EU's poor handling of the crisis.

​Migrants typically used Libya as a launchpad to cross the Mediterranean Sea to reach Greece and Italy, before travelling inland to wealthier EU member states, such as Germany.

Countries worst affected — Germany, Sweden, Greece and Italy — are experiencing a clear trend of voters shifting rightwards on the political spectrum, in search of alternative leaders and policies to alleviate the situation.

Reasons Behind This Shift

Surging crime and the emergence of "no-go zones" — admitted by German Chancellor Angela Merkel just last month — are perhaps the most troubling matters for voters, and potentially the driving force of Europe's changing political landscape.

The financial and economic implications of hosting vast amounts of migrants are inevitably also a cause for concern, and an influencing factor on public opinion.

We will took our country back! Piss off Brussels!🇮🇹 #ItalyElection2018

​Germany and Sweden have well-funded migrant welfare programs, with billions of Euros of public money allocated annually to these initiatives, instead of being spent on other projects or areas of the economy.

Housing and already oversubscribed public services — such as education and healthcare — are being placed under further pressure as a consequence of the EU's "open-door" migrant policy, adversely affecting those who can't afford private alternatives.