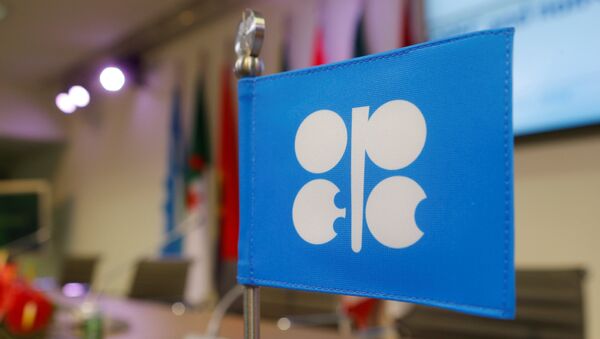 © REUTERS / Heinz-Peter Bader/File Photo
Subscribe
HOUSTON (Sputnik) - The Organization of the Petroleum Exporting Countries (OPEC) will hold talks with the representatives of the financial market, including hedge funds, on the sidelines of the CERAWeek that takes place in US city of Houston, OPEC Secretary General Mohammed Barkindo said on Tuesday.

“Our meetings with the players in the financial market, including hedge funds and money managers, it’s also a continuation of the first meeting we held here last year in CERAWeek,” Barkindo said during a press briefing on the sidelines of the CERAWeek.

The OPEC Secretary General also said that the organization had agreed to hold talks with the US shale oil producers in the US city of Houston later on Monday.

“We agreed to reconvene tonight to continue this energy dialogue,” Barkindo said during a press briefing.

Barkindo said that OPEC will continue to maintain dialogue with the US shale oil producers, but the talks do not involve such issues as oil prices and production cuts.

A source in one of the delegations told Sputnik that energy ministers of Ecuador, Equatorial Guinea, Kazakhstan, Kuwait, Nigeria and the United Arab Emirates will take part in the upcoming meeting of OPEC with the US shale oil producers.

Also, a source close to the talks reported that over 50 companies will take part in the meeting of the Organization of the Petroleum Exporting Countries with the US shale oil producers.

“Over 50 companies [are] expected,” the source said, when asked which US shale producers would take part in the meeting.

The source also did not rule out that the companies from other countries would participate in the energy dialogue with OPEC as well.