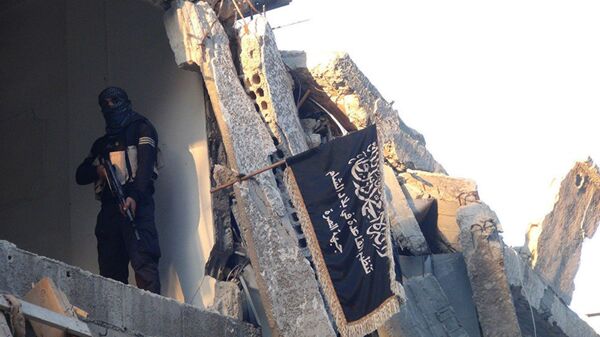 © AFP 2023 / RAMI AL-SAYED
Subscribe
International
India
Africa
HMEYMIM (Syria) (Sputnik) - Jabhat al-Nusra terrorist organization have fired mortar shells at the humanitarian convoy that was on his way to the Syrian town of Douma in Eastern Ghouta, no casualties are reported, the representative of the Russian Defense Ministry's Center for Syrian reconciliation, said late on Monday.

The center earlier said that the convoy of 45 trucks delivered 247 tonnes of humanitarian aid to residents of Douma.

Russia Has Evidence West Trying to Save Nusra Front for Regime Change - Lavrov
Also, Yevtushenko noted that the militants in Syria’s Eastern Ghouta have intensified the shelling of Damascus and the Muhayam-Al-Wafedin humanitarian corridor.

“Despite the daily ‘humanitarian pauses’ introduced at the initiative of the Russian side within the framework of the UN Security Council’s Resolution 2401, the illegal armed groups in the Eastern Ghouta are gradually enhancing  the shelling of Damascus and the Muhayam-Al-Wafedin humanitarian corridor,” Yevtushenko said.

The shelling was carried out from the territory that is controlled by the Jaysh al-Islam militants, the official underlined and noted that a hospital was shelled early on Monday.

"The civilians of Eastern Ghouta are blocked by the terrorists who are using them as human shields," Yevtushenko added.

Erdogan, Macron Discuss Situation in Eastern Ghouta - Reports
The Russian Center for Syrian reconciliation also announced on Monday its readiness to provide a safe exit for the leaders of armed groups and their families from the Eastern Ghouta suburb of Damascus.

"If you do not want to release civilians from the occupied areas, we are ready to guarantee a safe exit from Eastern Huta to you and your families," Maj. Gen. Yury Yevtushenko said in a statement.