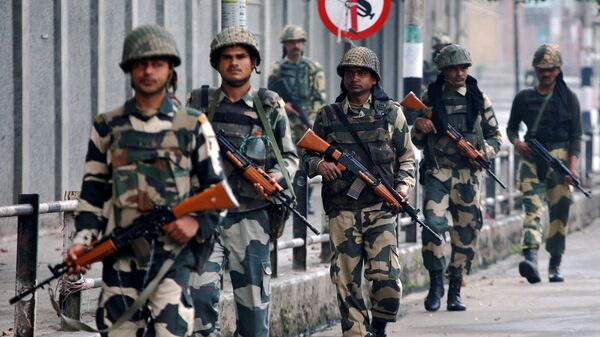 Rail services and telecommunication facilities have been cut in the Kashmir Valley as protests have erupted over the killing of six alleged militants by the Indian Army. The local governments, as well as separatist leaders, claim that all of those killed were not militants but civilians.

New Delhi (Sputnik) — An overnight encounter by the Indian Army has sparked fresh tension in the Kashmir Valley with the local government claiming that the six killed were civilians and not militants as claimed by the army. Jammu and Kashmir Chief Minister Mehbooba Mufti said they were "civilians caught in the crossfire."

"Deeply distressed by more deaths of civilians caught in the crossfire in Shopian. My heartfelt condolences to the deceased's families," Chief Minister Mufti tweeted.

Deeply distressed by more deaths of civilians caught in the crossfire in Shopian. My heartfelt condolences to the deceased’s families.

Earlier, the Indian Army had claimed that a group of militants had attacked a Mobile Vehicle Check Post (MVCP) of the army's 44 Rashtriya Rifles at Pahnoo in Shopian district on Sunday at 8 p.m. (Indian Standard Time) following which the army launched an operation.

Hurriyat leaders, who advocate an independent Kashmir have lashed out at the Indian Army and called for a complete shutdown in Kashmir.

"Lies and propaganda being spread by the Indian Army as another civilian Gowhar Ahmed Lone found brutally killed behind his steering wheel in the mayhem let loose by them at Shopian yesterday night taking the toll of killings to 6!" Mirwaiz Umar Farooq, Chairman, All Parties Hurriyat Conference said.

Reports of clashes between the Army and locals have been reported from Kulgam, Bandipora, and part of Srinagar.

After the incident, schools and educational institutions which had just opened on Monday following a two-month-long winter break were closed again as a precautionary measure. Mobile and train services have also been suspended for security reasons.

"No train will run between Srinagar-Anantnag-Qazigund in south Kashmir to Banihal in the Jammu region. Similarly, no train will chug on the Srinagar-Badgam line in central Kashmir to Baramulla in the north," a railway official briefed the media.