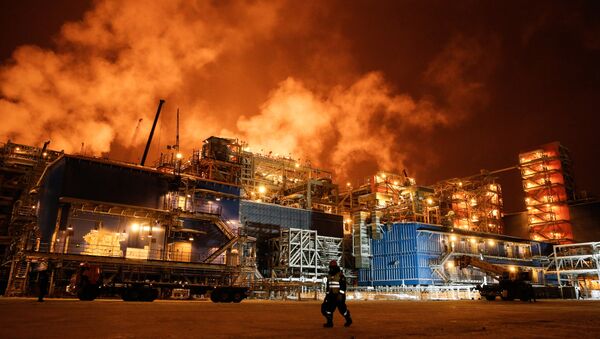 © AP Photo / Maxim ZMEYEV
Subscribe
When cold weather strikes, Europe seems to come to an understanding that Russian energy deliveries to the continent carry a purely economic significance, not a political one.

Deliveries of Russian liquefied natural gas (LNG) from Yamal in Siberia are set to arrive in the UK this week as the island nation struggles to dig out from Storm Emma, the Financial Times reported.

The LNG will be delivered to the UK by Royal Dutch Shell, two sources familiar with the shipment have said. The gas will be picked up this weekend, and delivered to an LNG terminal in Milford Haven, Wales, where it will be regasified and pumped into the UK network by March 6.

Perfect Storm Brewing in Britain as Temperatures Fall & Gas Supplies Run Low
The UK's first delivery of Siberian LNG came in late December, after the Forties pipeline system sending fuel from the North Sea was shut down due to a technical fault.

Europe's record cold snap, which has led to skyrocketing fuel prices and a reduction in gas reserves to five-year lows, has resulted in some observers underscoring Europe's dependence on Russian energy supplies. Bloomberg wrote that the freezing weather tested Europe's energy network, and demonstrated the continent's "relian[ce] on Russia to feed its energy needs."

"No other country has the capacity to match Russia's supply," the business news outlet stressed. "In Norway, some of its facilities including the Kollsnes gas plant were curtailed by outages during the peak of the crisis on Thursday."

On Saturday, Russian gas giant Gazprom announced that it had set a new record on exports to countries outside the former Soviet Union, delivering 713.4 million cubic meters per day. The deliveries were the continuation of recently-established trends. In 2017, the company increased its exports to countries outside the FSU by 8.4% — to 194.4 billion cubic meters.

Putin: Nord Stream 2 Is Purely Economic Project, Not Political
Earlier this week, Russian President Vladimir Putin said it was clear that Russian gas delivered by pipeline would remain cost competitive against US and Middle Eastern deliveries over at least the next decade.

Gazprom and a group of Western energy companies are now working on the construction of Nord Stream 2, a pipeline network running through the Baltic Sea to Germany, where it can be delivered onwards to Western Europe, including the UK. The US and Poland have voiced their opposition to the project.