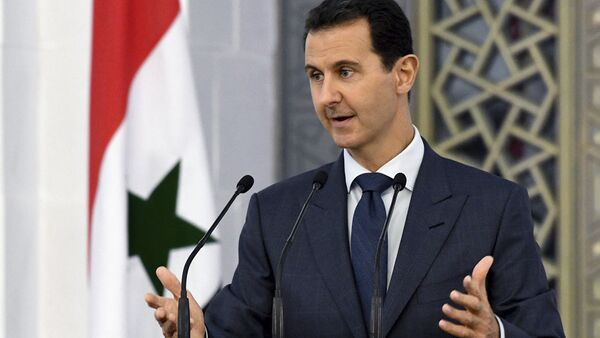 The arrival of the militia in Syria's Afrin, where Turkey is waging a military campaign against local Kurdish forces, is "natural," while the Syrian government forces are involved in other operations, Syrian President Bashar Assad said Sunday.

"The issue of the chemical weapons became one of the entries in the Western dictionary of lies. This is simply blackmail, used only as a pretext for airstrikes on the Syrian Armed Forces," Assad said, quoted by the press service.

"This coalition supports the IS [Daesh], Nusra Front and other similar terrorist groups," Assad said, quoted by his press service.

Assad stated that the operation against militants in Syria's Eastern Ghouta would continue alongside measures to allow civilians to leave the enclave.

"Most in Ghouta want to leave terrorists for the cover of the homeland, so the operation against terrorists will continue, while simultaneously the possibility for the civilians to leave for the government-controlled territory will be opened," Assad said, quoted by the SANA news agency.