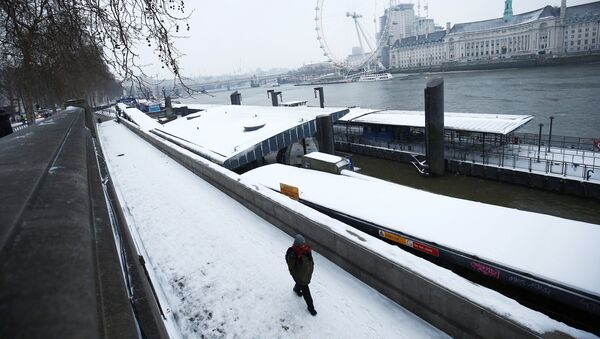 Many half-marathons across Britain have been cancelled as a result of snow and ice from the ‘Beast from the East’, leaving thousands of psyched up runners in the lurch. Sputnik spoke with athlete Sophie Harley, who has been training to run the Edinburgh half-marathon in preparation for the London marathon in April.

Sputnik: Why have the marathons been cancelled?

Sophie Harley: I signed up for the half-marathon a couple of months ago, all to raise money for Battersea Cats and Dogs Home and we have just heard the race has been cancelled in interest of the safety of all of the runners. There is large quantities of snow and ice on the roads. This is quickly turning into slush, which might well freeze if the temperature drops again. The health services are already under strain, so I think sprained ankles from sweaty runners would put even more pressure on them. I am sad, but given the conditions of the road, I think it is understandable. I think it is best for us all to stay safe before the London Marathon in a months’ time.

The half marathon was all in training for the Lonadon Marathon, as well as raising money; I was planning to run it in my Dalmatian onesie, which again, is not very warm. I got it from a dance-wear shop, its custom made for me, and very tight, Lycra fitting, with a little hat and Dalmatian ears, and quite a long, waggly tail. Kind of like a morph suit. This half marathon was revving up to be a test run for the morph suit, to see how well it copes with exercise!

Sputnik: What brings you to run a marathon? It seems like quite the feat of athleticism?

Sophie Harley: As a keen runner, it is nice to challenge myself, and have something to work towards. I have attended London Marathon's before, and I have always wondered whether that is something I could do myself. It's an amazing thing to do, the atmosphere is amazing, and I thought if other people can do it, then I can as well.

Sputnik: It is known, that when people run a marathon, they often hit a metaphorical 'wall', that you hit somewhere near the end. How do you intend to psyche yourself up to that?

Sophie Harley: Well, I am quite interested in the whole concept of the wall, the furthest I have ever run in my life is 27 kilometers, and a full marathon is 42 kilometers. So it's a good 15 more kilometers! I haven't hit the wall yet, so I'm interested to see if it actually will happen, and if it does what I will do about it! I don't want to walk, because if you start walking you can't get started again!

Given the near 'ration-like' circumstances here in Scotland at the moment, the supermarkets are pretty much devoid of food. I have two eggs in my pantry, which I am saving for Sunday morning, when I intend to run the half marathon on a treadmill, to keep out of the snow! We need a bit a substance to run on. A bit of toast isn't really going to cut the mustard for a half marathon!

Sputnik: Is there any particular advice to have a meal before the race?

Sophie Harley: You need those carbs before the big race, and I actually went into Sainsbury's this morning, and there was no a single potato, because no deliveries are making the journey through the snow! Like the potato famine!

Sputnik: What advice would you give to those people whose half-marathons have been cancelled this weekend?

Sophie Harley: I'd say don't be down-heartened; all the money that you have raised will still go to charity. And try to run it on a running machine like I'm doing.

The race will be postponed, but we are yet to hear about that, but get out, do some exercise, do the best you can. You have trained up until now, so don't let the snow stop you!

The views and opinions expressed by Sophie Harley do not necessarily reflect those of Sputnik.