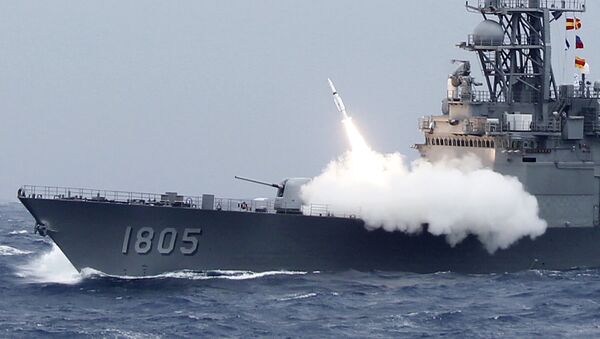 Taiwan intends to increase its military budget in order to have more opportunities to ensure peace and stability in the region alongside neighboring countries, Taiwan's Prime Minister Lai Ching-te said at the East Asia Peace Forum in Taipei on Saturday.

The Prime Minister, however, did not specify the prospective amount.

The increase in spending will take place amid challenges East Asia is currently facing, among which are Pyongyang's nuclear activity as well as China's military drills in the region, according to Lai Ching-te.

According to the minister, Taipei also intends to make all necessary efforts to fully support the sanctions against North Korea implemented by the UN Security Council.

Asia
Taiwan Rejects China's Offer to Help With Quake Rescue Mission - Official
Lai Ching-te's statement echoes the suggestions President Tsai Ing-wen made last year, when she too spoke about the increase in military spending. She noted that the military expenses of Taiwan would increase by 2 percent every year, adding that "it is necessary to be more prepared in the face of the growing threat in the field of cybersecurity and espionage." In October 2017, the administration of Taiwan submitted its proposed military budget for 2018, amounting to 10.7 billion dollars.

Tensions between Taiwan and China have been running high recently over a bill that has moved to the US Senate after being approved by the Senate Committee on Foreign Relations. The legislation will encourage contacts between officials in the US and Taiwan, which Beijing considers to be a breakaway province.

The relations between Beijing and Taiwan remain strained since the former considers the rebellious province to be an inherent part of "one China." Hostility between Taipei and Beijing has mounted since the election of Tsai Ing-wen as Taiwanese president, as China suspects she plans to advance the region's independence, although Tsai herself has repeatedly stated she stands for the status quo. China has never ruled out the use of force against the island to bring it under the mainland's control.

Another threat for Taiwan, according to Lai Ching-te, is North Korea's nuclear program. On February 23, the United States imposed what Trump described as the "largest-ever" sanctions package on North Korea, which targeted shipments of petroleum and coal and also included entities and vessels registered in Taiwan. Taiwan’s Foreign Ministry said that the government was committed to enforcing the sanctions and its efforts were recognized by the US and the international community.