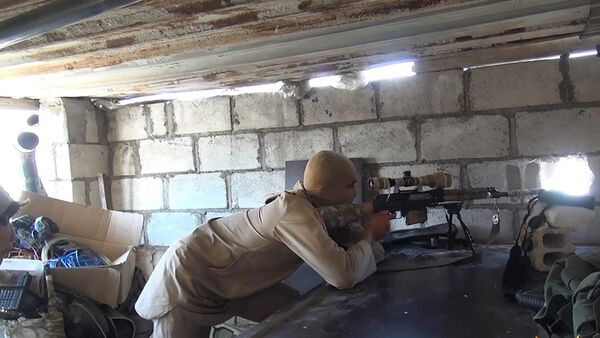 "[The] situation near the check point is still strained. Since yesterday evening, snipers have been shelling at approaches to the check point. Today, the Jaysh al-Islam terrorists have carried out two mortar attacks from eastern outskirts of Douma targeting the security corridor leading to the check point near Muhayam al-Waffedin," Yevtushenko said.

According to Yevtushenko, residents of Eastern Ghouta are provided with information about exit routes and rules for safe leaving the area through the humanitarian corridor.

The spokesman noted that the center received a lot of hotline messages, in which civilians were complaining about unbearable living conditions and repressive measures taken by the militants.

'Question of Life and Death': UN Calls for End to Fighting in Eastern Ghouta
In particular, terrorists do not let civilian leave the zone, with people trying to use other possible exits to leave the terrorist-controlled areas without crossing the prepared humanitarian corridor, Yevtushenko clarified.

Yevtushenko also reported that two children had managed to approach the check point under fire from the insurgents and cross it with the help of the Syrian government forces who protected them from the fire.

Earlier in the day, another humanitarian pause was declared in Eastern Ghouta in the period from 9:00 a.m. till 14:00 p.m. (07:00-12:00 GMT), while the humanitarian corridor has been functioning for four days now.

The resolution adoption followed the escalations of tensions in Eastern Ghouta, which is located on the outskirts of the Syrian capital Damascus and is controlled by various militant groups.

Meanwhile, UN High Commissioner for Human Rights Zeid Ra’ad Hussein described the current developments in Syria including the situation in Damascus' suburb of Eastern Ghouta as potential "crimes against humanity" and vowed to hold accountable those responsible for them.

"I must emphasize that what we are seeing, in Eastern Ghouta and elsewhere in Syria, are likely war crimes, and potentially crimes against humanity. Civilians are being pounded into submission or death. The perpetrators of these crimes must know they are being identified; that dossiers are being built up with a view to their prosecution; and that they will be held accountable for what they have done," Hussein said on Friday in a statement.

US Mulls Holding Russia Accountable for Situation in Eastern Ghouta
The commissioner pointed out that the International Criminal Court had to consider the situation in Syria.

"Syria must be referred to the International Criminal Court. Attempts to thwart justice, and shield these criminals, are disgraceful," Hussein said.

Last week, the UN Security Council unanimously adopted the resolution 2401 that urges all parties to the conflict to immediately stop all clashes and adhere to a long-term humanitarian ceasefire for at least 30 days across the entire Syrian territory in order to ensure the safe and unhindered delivery of humanitarian aid supplies, as well as the medical evacuation of injured people. Despite the adopted resolution the situation in Eastern Ghouta remains tense.