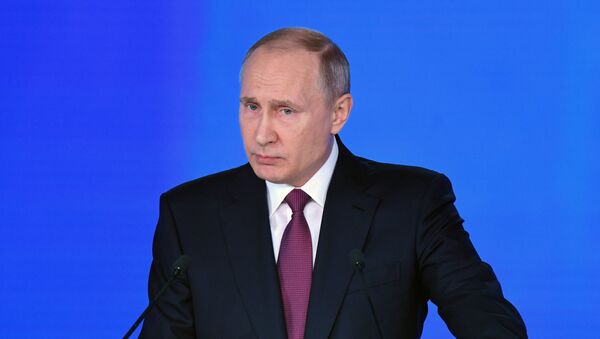 © Sputnik / Grigoriy Sisoev
/
Go to the photo bank
Subscribe
President Putin's remarks on Russia's progress in its nuclear rearmament have sparked panic in the West about Moscow's supposed plans to kick off an arms race and start a new Cold War. But what observers ignored was the core of his message – that it was the West itself that forced Russia to build up its capabilities amid endless provocations.

Vladimir Putin has made it crystal clear that Moscow is on the defensive, years after fruitlessly asking its Western 'partners' to stop encircling Russia with a web of strategic weapons, bases and power-changing conflicts – from the Middle East to Eastern Europe.

Commenting on the president's "Nobody wanted to listen to us. So listen now," remarks, which accompanied the new strategic weapons unveiled in his Thursday speech, the Guardian and Voice of America accused Putin of "threatening" the US with an arms race, while The Washington Post charged the Russian leader with digging up "chilling echoes" of the Cold War.

The Pentagon boasted that it was "ready" to react to "anything that may come our way." The White House, in turn, accused Moscow of "developing destabilizing weapon systems…in direct violation of its treaty obligations."

Russia Intentionally Leaked Info on Advanced Sarmat ICBM for US in 2007 - Source
In Thursday's speech, Putin recalled a warning he made in 2004 to build a new generation of strategic weapons to counter the deployment of the US global missile defense system.

"As you can see, we made no secret of our plans and spoke about them openly, primarily to encourage our partners into holding talks. Let me repeat, this was in 2004," Putin emphasized. Unfortunately, notwithstanding Moscow's status as a nuclear power, "nobody really wanted to talk to us about the core of the problem. Nobody wanted to listen to us. So listen now," he quipped, before moving on to a series of presentations about Russia's latest strategic weapons.

For any mainstream media giants who would like to blame Russia's new weapons for being the opening shot in a Cold War 2.0 confrontation, there are a few things worth bearing in mind.

#1: It wasn't Moscow that withdrew from the Anti-Ballistic Missile Treaty in 2002 and began to deploy a missile defense system on its strategic rival's western borders, under the pretense of an imaginary threat from Iran.

In 2016, Putin recalled that Washington had continued its missile defense buildup in Poland and Romania even after the signing of the Iranian nuclear deal in 2015, thus dispelling any pretense that the system was a response to any sort of Iranian threat.

Pointing out that Moscow had made a series of proposals to Washington on the creation of a joint missile defense shield, Putin pointed out that all of Russia's proposals "were rejected…Everything is done unilaterally, without taking into account our concerns." 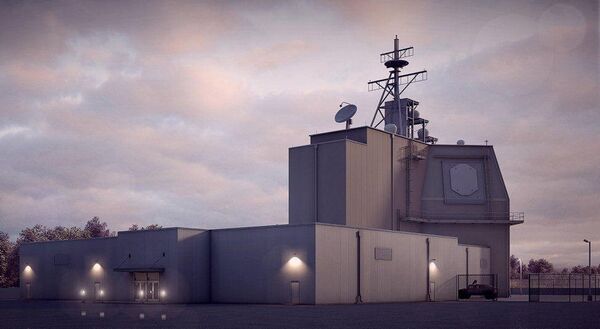 White House Reveals Concerns of European Leaders Over Russian Advanced Weapons
In what can now be seen as an obvious nod to the strategic weapons which were unveiled this week, Putin emphasized in his 2016 remarks that Moscow would not allow itself to be dragged into an arms race, but would "go our own way, working very carefully, without exceeding the plans on financing of the rearmament program we already have. But we will adjust these plans to account for the emerging threats to Russia's security."

2#: It's the US and NATO which have been encroaching on Russia's borders and ringing the country with military bases, not the other way around.

The Western alliance has long forgotten the promises it made to Moscow in the early 1990s not to expand eastward, pushing further and further east in several waves in 2000, 2004, 2009 and 2017, and eyeing the prospects of alliance membership for Georgia, Finland, and Sweden. The 2014 Maidan coup d'état in Kiev only heightened Russian concerns, bringing the prospect of NATO troops and weaponry stationed in the Russian heartland one step closer to reality. 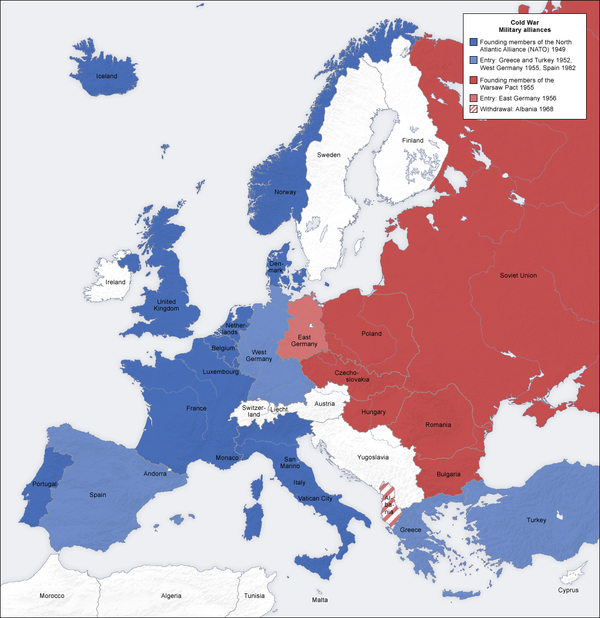 Map of Cold War military alliances in Europe. Since the Soviet collapse, NATO has swallowed up every country that was once part of the Warsaw Pact, and even began advancing into the former USSR itself.
CC BY 3.0 / San Jose / Cold War Europe military alliances map

#3: It's the US, not Russia, which recently adopted a dangerous Nuclear Posture Review approving the use of nuclear weapons to react to non-nuclear threats, up to and including cyber threats.

President Putin said as much in Thursday's speech, stressing that Russia was "greatly concerned" by the document's implications, and warning that the new doctrine "reduces the threshold for the use of nuclear weapons."

"I should note that under our country's military doctrine, Russia reserves the right to use nuclear weapons solely in response to a nuclear attack, or an attack with other weapons of mass destruction against our country or its allies, or an act of aggression against us using conventional weapons which threatens the very existence of the state," Putin emphasized. 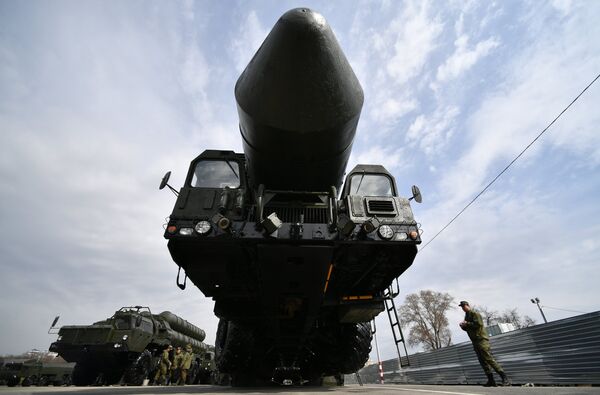 4#: Unlike Washington, Moscow has not spent the last two and a half decades attempting to establish a unipolar world order through the use of military force, from Yugoslavia and Afghanistan to Iraq, Libya, Yemen, Syria and elsewhere.

"We are not threatening anyone, aren't going to attack anyone or take anything from anyone by threat of arms….Just the opposite…Russia's growing military power is a solid guarantee of global peace, as it preserves and will continue to preserve strategic parity and the balance of forces in the world, which, as is well-known, has been and remains a key factor of international security after WWII and up to the present day." 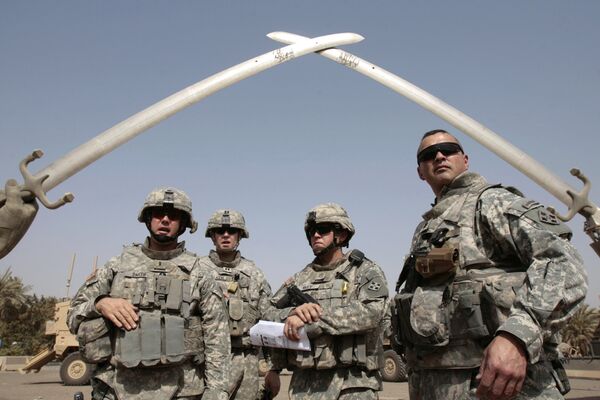 US soldiers stand near the landmark "Hands of Victory", built by executed Iraqi president Saddam Hussein to commemorate Iraq's victory in the Iran-Iraq war, inside Baghdad's Green Zone as they prepare to go on a mission on July 5, 2008
© AFP 2021 / AHMAD AL-RUBAYE
000000
Popular comments
None are so deaf as those who hear but do not listen.

Vargus
3 March 2018, 20:07 GMT8
000000
So, you're scared, eh? Good. That's the first step to understanding what your government has done, its reckless provocations that are now coming home to roost. You can, of course, continue to delude yourself about your country's overall ability to dictate affairs, but this will only worsen your problem. The Lord Jesus Christ said you should do unto others what you would have them do unto you. The US government has chosen to do unto others all manner of war, misery, catastrophe, deception and swindle. What is coming back at you now is a mild rebuke to what you have done to others, yet you whinge like the Sanhedrin and the Pharisees defending their money-changing racket. Actually, money swindling IS what the US government is defending, inter alia. All that is left if you continue down your chosen path is death and destruction. Turn back and repent of your sins.
ScoutPilot
3 March 2018, 20:16 GMT12
000000
Newsfeed
0
New firstOld first
loader
LIVE
Заголовок открываемого материала
Access to the chat has been blocked for violating the rules . You will be able to participate again through:∞. If you do not agree with the blocking, please use the feedback form
The discussion is closed. You can participate in the discussion within 24 hours after the publication of the article.
To participate in the discussion
log in or register
loader
Chats
Заголовок открываемого материала
Worldwide
InternationalEnglishEnglishMundoEspañolSpanish
Europe
DeutschlandDeutschGermanFranceFrançaisFrenchΕλλάδαΕλληνικάGreekItaliaItalianoItalianČeská republikaČeštinaCzechPolskaPolskiPolishСрбиjаСрпскиSerbianLatvijaLatviešuLatvianLietuvaLietuviųLithuanianMoldovaMoldoveneascăMoldavianБеларусьБеларускiBelarusian
Transcaucasia
ԱրմենիաՀայերենArmenianАҧсныАҧсышәалаAbkhazХуссар ИрыстонИронауОssetianსაქართველოქართულიGeorgianAzərbaycanАzərbaycancaAzerbaijani
Middle East
Sputnik عربيArabicArabicTürkiyeTürkçeTurkishSputnik ایرانPersianPersianSputnik افغانستانDariDari
Central Asia
ҚазақстанҚазақ тіліKazakhКыргызстанКыргызчаKyrgyzOʻzbekistonЎзбекчаUzbekТоҷикистонТоҷикӣTajik
East & Southeast Asia
Việt NamTiếng ViệtVietnamese日本日本語Japanese中国中文Chinese
South America
BrasilPortuguêsPortuguese
NewsfeedBreaking
17:01 GMTRansomware Gang Sells Italian Celebrities' Data Stolen in SIAE Breach for $500,000 – Report
16:36 GMTUS Media Dubs Russia’s Okhotnik Drone ‘Beast’ That Could Pose ‘Big Problem for NATO’
16:14 GMTRussia Urges UN Mission to Ensure Security of Staff in Russian Office in Pristina
16:06 GMTGreek Police Say 7 Officers Injured in Chasing Car Thieves in Athens, One Offender Dead
15:47 GMTRussia-Turkey Friendship Park Opens in Antalya - Video
15:06 GMTTuskless Elephants Evolve in Mozambique Amid Ivory Poaching, Scientists Say
15:03 GMTCCTV Footage Shows Moment Russian Explosives Plant Turned Into Deadly Blazing Inferno
14:54 GMTStunning Discovery of 193 Million-Year-Old Dinosaur Eggs Sheds New Light on Reptiles’ Early Species
14:52 GMTErdogan: Ambassadors of 10 Countries Calling for Human Rights Activist's Release to Be Expelled
14:26 GMTAntifa Protest in Support of Left-Wing Politics Takes Place in Stuttgart
14:18 GMTGazprom Ready to Prolong Gas Supplies to Moldova if Kishinev Pays Gas Debts
14:06 GMTRussian MoD: Berlin Must Know How Amassing Troops Near Russia's Border Ended for Europe in Past
13:59 GMTTokyo Says Self-Defenсe Forces Fighters Scrambled Over Chinese Chopper Takeoff Near Danjo
13:54 GMT24-year-old Who Prepared Fatal Prop Gun for Baldwin Was Worried She ‘Wasn’t Ready’ for Armourer Job
13:15 GMT‘Wicked Sense of Humour’: Turkey Pinches Reporter’s Buttocks, Other Birds ‘Giggle’ - Video
13:02 GMTRally in Support of Assange Takes Place in London
12:28 GMTDHS to Dole Out $455K to Erect Fence Around Biden’s ‘Summer White House’ in Delaware
12:21 GMTMoscow Assured Chisinau of Additional Gas Supplies in October, Moldovan Deputy Prime Minister Says
12:20 GMTMerkel Says Always Felt 'Significant Differences' of Opinions With Putin
12:12 GMTAuthor of Infamous Steele Dossier Claims Putin May Have Served Him Tea