Those Responsible for Damascus Shelling Should Be Punished - Russian MoD 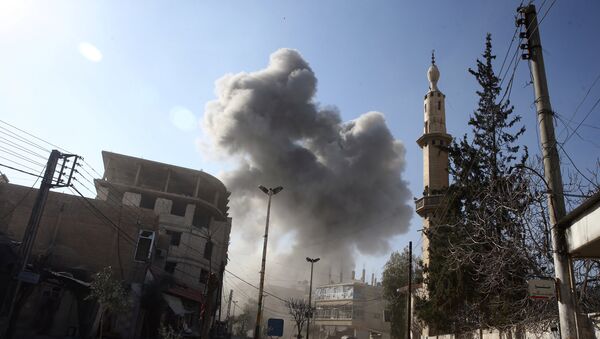 The situation in Eastern Ghouta has been tense over the past several weeks, resulting in ongoing shelling by local militants on Damascus and its suburbs, which prompts retaliatory fire from the Syrian pro-government forces.

Today, the humanitarian corridor in Eastern Ghouta, a suburb of Damascus, has been shelled four times, as terrorists continue their provocations in Syria even during aid pauses, according to the Russian Reconciliation Center for Syria. Three civilians were injured as a result of the continuous shelling of checkpoints in Eastern Ghouta by the terrorist groups, the defense ministry says.

The Russian military called militants' actions a "war crime" and vowed to bring those responsible to justice.

Russian Military Detects Terrorist Snipers Haunting Civilians in Eastern Ghouta
The ministry also warned that the al-Qaeda-linked Nusra Front was preparing provocations in Eastern Ghouta in order to prevent the UN humanitarian convoy from reaching civilians. Militants in the outskirts of Damascus actively use underground tunnels for their raids, the Defense Ministry added.

On March 3, the fifth humanitarian pause, aimed at enabling the civilians of Eastern Ghouta to leave the region, began. Four previous aid pauses provided no results as militants continue to hold local residents on pain of death.

E Ghouta Terrorists Prepare Chemical Attacks to Discredit Damascus - Russian MoD
Last week, the UN Security Council unanimously adopted resolution 2401 that urges all parties to the conflict to immediately cease hostilities and adhere to a long-term humanitarian ceasefire for at least 30 days across Syria in order to ensure the safe and unhindered delivery of humanitarian aid supplies, as well as the medical evacuation of injured people. Despite the adopted resolution, the situation in Eastern Ghouta remains tense.

Since the ceasefire does not apply to anti-terrorist operations, Syrian government forces continue to battle militants in the region. The situation in Eastern Ghouta has escalated over the past weeks as local militants are actively fighting back, shelling Damascus and its suburbs. Damascus says it opens fire in response to shelling from Eastern Ghouta, whereas the western countries are accusing the Syrian government and Russia of being responsible for the mounting tensions in the area.