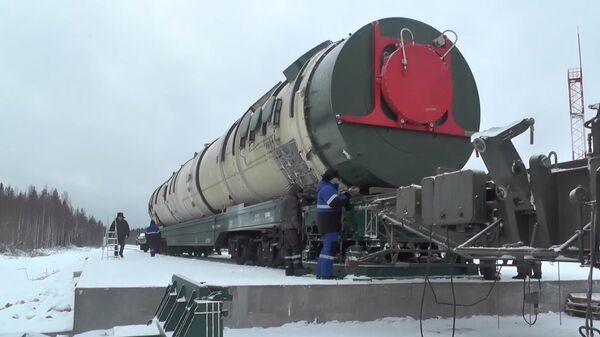 "We have said that the creation of global missile defense system by Washington will lead to nothing. Moreover, in 2007 a leak on the strategic missile system Sarmat that is under development was made specifically for them [the United States]," the source said.

Russia did not say anything on Sarmat’s development and took steps to preserve secrecy. But all the necessary tests for this nuclear weapon were carried out in full. The results could serve as absolute basis to assert that this project is "polished" and fulfilled, the source added.

Russian upper house Defense and Security Committee chairman Viktor Bondarev told Sputnik on Friday that several pre-production Sarmat intercontinental ballistic missiles will be put into service with Russia's Strategic Missile Forces in the near future. The lawmaker added that the Sarmat missile, designed to replace the aging but reliable Soviet-era R-36M2 Voevoda (SS-18 Satan) ICBM, could be deployed in existing silos with minimal changes to infrastructure of launch sites.

Currently, only Russia has developed and implemented such technologies, the source underlined.

Viral
Where Did the Russian Missile Hit? Twitter Users Find Alleged Target on the Map
Several years earlier a leak on the development of autonomous underwater vehicles of unlimited range "was not accidental, but absolutely conscious. In order to encourage our Western partners to descend from heaven to earth and begin to discuss the conditions for securing global security," the source added.

Moscow also have been sending signals to its Western partners on the futility of their efforts to neutralize Moscow’s strategic potential by their missile defense systems, according to the source.