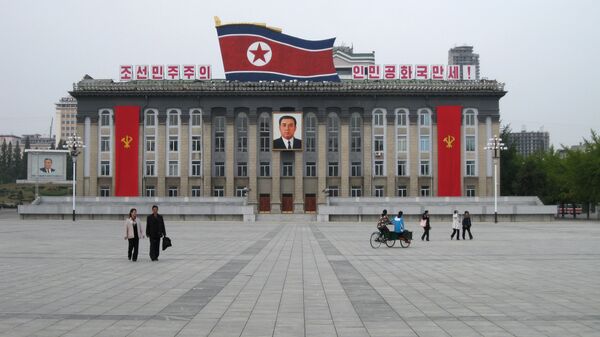 North Korea lambasted the US for making up preconditions for dialogue between states, as Seoul prepares to send an envoy to Pyongyang to find a way to ease the nuclear standoff.

A North Korean Foreign Ministry spokesman said Saturday that dialogue between Pyongyang and Washington is "possible," but underscored that it will happen only on equal footing and without preconditions.

"There had been no case at all where we sat with the US on any precondition, and this will be the case in future, too" the spokesman said, according to North Korea's KCNA agency.

"We have the intention to resolve issues in a diplomatic and peaceful way through dialogue and negotiation, but we will neither beg for dialogue nor evade the military option claimed by the US," he continued.

The US has lately once again expressed a desire for talks with North Korea, but has consistently demanded that the country give up its nuclear weapons program first. This is unacceptable to Pyongyang, which insists on sitting down "on an equal footing."

"[US President Donald] Trump and [South Korea President Moon Jae-in] noted their firm position that any dialogue with North Korea must be conducted with the explicit and unwavering goal of complete, verifiable, and irreversible denuclearisation," reads a White House readout of the two leaders' phone call from earlier this week.

Seoul, on the other hand, appears more than willing to find rapprochement with its northern neighbor. The 2018 Winter Olympics have been perceived by many as "thawing" between the two countries, as the North sent athletes, cheerleaders and a high-level delegation led by Kim Yo-jong, sister of North Korean leader Kim Jong-un, to the Games.

Taipei Set to Boost Military Spending, Cites Threats From China, North Korea
The comments from Pyongyang's Foreign Ministry come as Seoul prepares to send an envoy to the North to help facilitate the way for talks on the tense nuclear face-off, a development that springs from renewed contacts launched under the auspices of the Olympics.

In a meeting with North Korean General Kim Yong-chol Sunday, Moon also urged the North to engage in dialogue with the US as soon as possible, to which Kim responded by saying the North was "very willing" to hold talks.