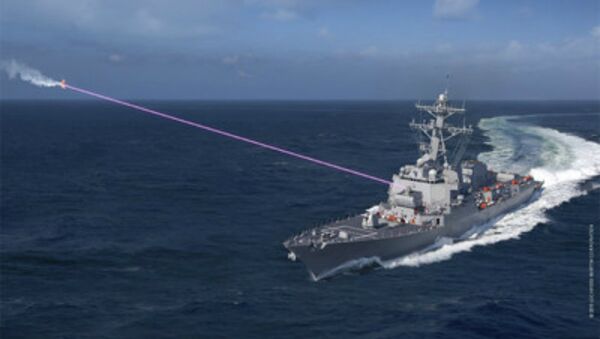 © Lockheed Martin
Subscribe
The US Navy will arm a warship with a powerfully lethal laser weapon within the next two years, according to a new report.

In 2014, the US Navy armed the USS Ponce with a laser for deployment and testing in the Persian Gulf. The laser took down small drones and was able to pierce through the metal skins of small ships. The new laser, built by Lockheed Martin, will be at least two to five times more powerful than the Ponce's laser.

The new HELIOS laser churns out a 60 to 150 kilowatt beam, though Lockheed Martin has not disclosed the specific output, Breaking Defense notes. The Ponce's LaWS (Laser Weapon System), by contrast, had a power output of 30 kilowatts.

"I've been working on lasers for decades. To me, the HELIOS contract is really a watershed moment," Lockheed Martin scientist Rob Afzal told reporters on Thursday. "We're crossing out of science and technology and building real capability for the Navy."

The exact ship where the weapon will be deployed has not been revealed. Unlike LaWS' installation on a mere support ship, HELIOS will be attached to an Arleigh-Burke class destroyer and integrated with the ship's Aegis combat system, according to Afzal.

A laser in the 100 to 150 kilowatt range is useful against drones, small boats and some incoming weapons. For instance, the service is exploring ways to detonate hostile munitions with the laser before they are even fired, according to Breaking Defense.

"We are talking about lasers that now have the power and beam quality needed to defend against [unmanned aerial vehicles], small boat threats and possible some weapons (e.g. incoming missiles) over short ranges," the Center for Strategic & Budgetary Assessment's Mark Gunzinger said.

It also proves the US Navy's willingness to move toward non-kinetic weapons that don't require physical stocks of ammunition but rather just a sufficient amount of electric power, the analyst said.