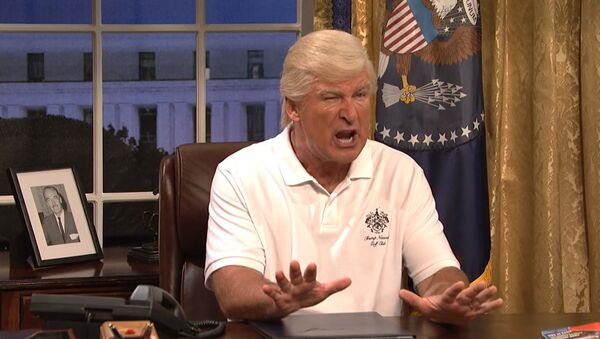 © Photo : Youtube / Saturday Night Live
Subscribe
International
India
Africa
The US president, who is famous for his witty tweets directed at those who criticize him, did not hold back his anger at Alec Baldwin.

The tweet by the president was misspelled but he got across his message calling the actor “terrible” and not funny.

In the first version of the tweet, Trump incorrectly wrote the name of the actor, twice calling him Alex (the correct name is Alec). The president also misspelled the word “dying” and wrote “dieing.”

"Alex Baldwin, whose dieing mediocre career was saved by his impersonation of me on SNL, now says playing DJT was agony for him," he wrote. "Alex, it was also agony for those who were forced to watch. You were terrible. Bring back Darrell Hammond, much funnier and a far greater talent!"

The post was deleted soon after and reposted later with corrected spelling and other minor tweaks.

​Trump expressed his anger at Alec Baldwin in what was a reference to a Hollywood Reporter interview, where Baldwin said of his impersonation of the president that "every time I do it now, it’s like agony. Agony. I can’t".

Baldwin seemed to suggest that he was so upset about Trump’s continuing popularity that impersonating him hurt.

Social media users had a field day with the tweet.