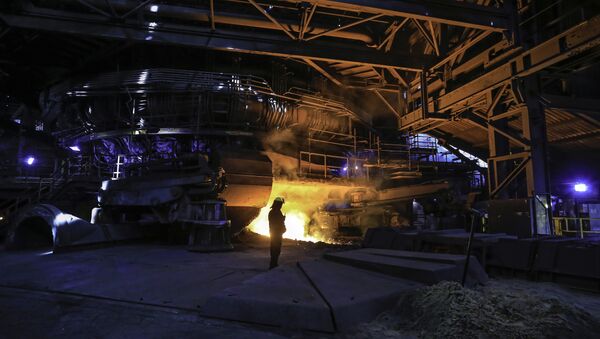 © AFP 2023 / Lindsey Parnaby
Subscribe
International
India
Africa
US President Donald Trump’s introduction of 25 percent tariffs on steel and aluminium imports to the United States has rattled markets around the world, including in Britain where the status of the steel industry is a particularly sensitive employment issue.

The Pound Sterling declined by 0.34 percent against Euro as the markets await a definitive response from Brussels. The European Union has been among the first to respond to the momentous move from Washington, stating that it was prepared to institute retaliatory tariffs on steel as well as on aluminium to which the US president also added a tariff of 10 percent.

Britain exports around $US495 million worth of steel annually to the US, however the new added costs for American firms will make it more attractive to source steel produced within the US instead.

Union and industry leaders have warned President Trump's moves increase the likelihood of a trade-war breaking out across the Atlantic.

Trump announces 25% tariff on Steel imports. Steel makes up 15% of UK exports to the US. Looks like those claims of new trade opportunities for the UK with the US were a little premature.#StopBrexit

World
France, Germany Rise Against US as Trump Hails Trade War
Steel is a particularly vulnerable industry in Wales, where the Welsh Labour leader warned that a Hard Brexit and attendant free trade agreements with major steel producers such as China could wipe out what remains of the country’s domestic industry.

In February the heir the British Monarchy, Charles the Prince of Wales conducted a tour of the UK’s steel producing regions to encourage renewed investment in the industry.

UK steel exports worth £360m a year could be hit by Trump’s tariff, Biz Department told me before today. That’s a hell of a lot of British jobs.

The new US steel tariffs are deeply worrying for the UK steel industry. Donald Trump is putting jobs at risk on both sides of the Atlantic. Thousands of steelworkers across the country voted for Brexit on the promise it would deliver a new era of international trade.

Labour leader Jeremy Corbyn has made a consistent point of not pushing to keep the United Kingdom inside the EU Single Market due to the restrictions on government subsidies for domestic industries such as steel which is a key policy commitment of the Labour Party.