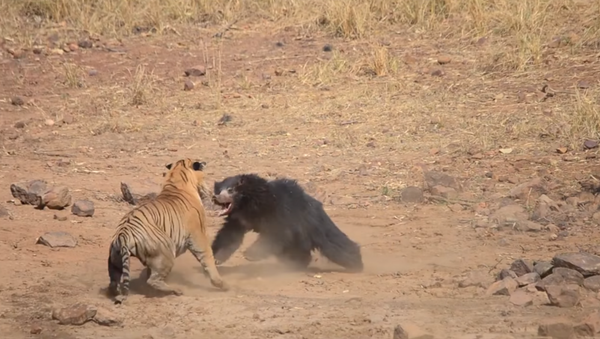 © Screenshot/ PseudoChaos
Subscribe
On Wednesday, tourists on a safari ride at India's Tadoba National Park witnessed how far a mama sloth bear is willing to go to protect her cub when confronted by a territorial tiger.

The violent fight, which was filmed by Akshay Kumar, chief naturalist at Bamboo Forest Safari Lodge, took place after the female sloth bear and her cub headed to a nearby watering hole, Jamun Bodi, which had been previously claimed by the tiger.

​With the tiger launching his attack after spotting the two in his territory, Kumar told NDTV that it left the mother bear with no choice but to respond with her own dose of aggression.

"The tiger attacked the bear more than five minutes. It went after the sloth bear but she kept charging in order to protect her cub," Kumar told the outlet. "It went on for 15 minutes. The tiger was roaring. It was a severe fight."

The cub is heard crying out in the background as mom tries to take care of business. He later runs away from the altercation.

According to experts, though it might've appeared as if the mom was going to lose the fight, it was ultimately her thick fur that saved her.

"Sloth bears are easy game," Anish Andheria, president of the Wildlife Conservation Trust, told the publication. "The only thing that saves the bear is the hair on the body because the tiger doesn't get a grip."

While neither the tiger nor the sloth bear technically lost the fight, it's safe to say these two won't be talking it up at the next watering hole get-together.

000000
Popular comments
hopefully the mother and cub were reunited.
michael
3 March 2018, 09:24 GMT
000000
They weren't fighting to kill. This looked more like roughhousing than a serious fight. Both were really thirsty, not hungry. The tiger could have bitten through the neck of the bear, but the the exhaustion of fighting in the heat, the thick fur and the fact they were both thirty, not hungry got them to sit peacefully next to each other until the sloth bear decided that the tiger might harm her young and she decided to chase the tiger away. The tiger then went where he wanted to go to begin with: into the water, to cool off and have a sip. Clearly, they didn't fight to kill.
Regula
5 April 2018, 05:11 GMT
000000
Newsfeed
0
New firstOld first
loader
LIVE
Заголовок открываемого материала
Access to the chat has been blocked for violating the rules . You will be able to participate again through:∞. If you do not agree with the blocking, please use the feedback form
The discussion is closed. You can participate in the discussion within 24 hours after the publication of the article.
To participate in the discussion
log in or register
loader
Chats
Заголовок открываемого материала
Worldwide
InternationalEnglishEnglishMundoEspañolSpanish
Europe
DeutschlandDeutschGermanFranceFrançaisFrenchΕλλάδαΕλληνικάGreekItaliaItalianoItalianČeská republikaČeštinaCzechPolskaPolskiPolishСрбиjаСрпскиSerbianLatvijaLatviešuLatvianLietuvaLietuviųLithuanianMoldovaMoldoveneascăMoldavianБеларусьБеларускiBelarusian
Transcaucasia
ԱրմենիաՀայերենArmenianАҧсныАҧсышәалаAbkhazХуссар ИрыстонИронауОssetianსაქართველოქართულიGeorgianAzərbaycanАzərbaycancaAzerbaijani
Middle East
Sputnik عربيArabicArabicTürkiyeTürkçeTurkishSputnik ایرانPersianPersianSputnik افغانستانDariDari
Central Asia
ҚазақстанҚазақ тіліKazakhКыргызстанКыргызчаKyrgyzOʻzbekistonЎзбекчаUzbekТоҷикистонТоҷикӣTajik
East & Southeast Asia
Việt NamTiếng ViệtVietnamese日本日本語Japanese中国中文Chinese
South America
BrasilPortuguêsPortuguese
NewsfeedBreaking
09:00 GMTUS to Upgrade Military Infrastructure, Develop New Bases in Australia, Guam to Counter China
08:53 GMTMoscow Rejects US Claims on Religious Persecution in Russia, Pledges Retaliation
08:44 GMTGhislaine Maxwell Likened to 'Eve in Garden of Eden' For Being 'Vilified' For Epstein's Sex Crimes
08:28 GMTCOVID-19 Live Updates: China Says 2022 Winter Olympics to Be Held as Planned Despite Omicron Spread
08:27 GMTCasualties Feared as Military Helicopter Crashes in Azerbaijan
08:15 GMTEt Tu? US Steals Most of Australia's Sale to China Amid Trade Row, Finds Study
07:49 GMTModerna CEO Thinks COVID-19 Vaccines Will Lose Efficacy Due to Omicron Strain
07:48 GMTLawyer Calls Jussie Smollett 'Real Victim' as Prosecutor Slams Actor's 'Secret Plan' for Hate Hoax
07:14 GMTBiden Axes Supply Chain Crisis Address, Seeks 'Ample Time' to Meet Business Leaders at White House
06:55 GMTSwedish Professor Pins COVID-19 Mutations on Skewed Vaccine Distribution
06:51 GMT'Happy Day': Indians Excited as Parag Agrawal Appointed Twitter CEO
06:45 GMTBill Seeks to Bar Politicians With Criminal Charges From Serving as Israeli PM, But Is It Realistic?
06:34 GMTJapan Supports Postponement of WTO Meeting Due to Omicron Variant
06:22 GMT'Insult to Legacy': Gucci Heirs Threaten Lawsuit Over 'House of Gucci' Movie
06:09 GMTFamily in India 'Robbed on Pretext of Vaccination Against Omicron Strain'
06:09 GMTPolice Reportedly Search Marilyn Manson's LA Home Amid Probe Into Sexual Assault Claims
06:01 GMTIslamists, Terror Financiers and Motorcycle Gangs Reportedly Received COVID-19 Aid in Sweden
05:28 GMT'Shine Like a Diamond': Barbados Declares Rihanna National Hero as Island Becomes Republic - Videos
05:25 GMTA New Republic Is Born as Barbados Cuts Cord with UK Monarchy, Ditches Elizabeth II As Head of State
05:16 GMTSwedish Researchers Face Prosecution for Study About Immigrants' Prevalence in Rape Verdicts