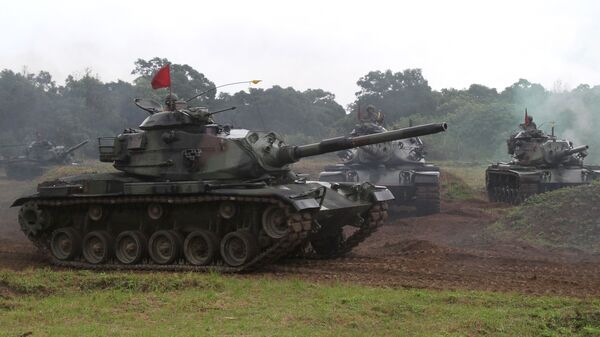 A new bill meant to improve US-Taiwan relations has passed through the US Congress, threatening to further inflame tensions between the two nations and China - which is less-than-pleased with the US cozying up to their most bitter rival.

On Thursday, the US Senate unanimously passed the Taiwan Travel Act (TTA), a bill meant to improve relations between Washington and Taipei. The bill, which had already passed the House of Representatives, is meant to encourage US and Taiwanese leaders to make more visits to the opposite country and to increase business opportunities for Taiwanese economic representatives in the US. US President Donald Trump is expected to sign it into law.

It was all love between the US and Taiwan on Twitter. The US State Department described Taiwan as "a vital partner, a democratic success story & a force for good in the world." Taiwanese President Tsai Ing-wen thanked the US, calling their alliance "a key pillar of peace & stability for the Indo-Pacific region."

#TaiwanTravelAct symbolizes the #US Congress' longstanding support for #Taiwan. The Taiwan-US partnership is a key pillar of peace & stability for the Indo-Pacific region & I am grateful to all members of Congress who supported this important bill

Appreciate comments made by @StateDept on #Taiwan being “a vital partner, a democratic success story & a force for good in the world.” We look fwd to continued work with US government to further Taiwan-US relations

Naturally, Beijing was displeased. "China is strongly dissatisfied with this and resolutely opposes it and has already lodged stern representations with the US side," said Foreign Ministry spokesperson Hua Chunying.

China's Taiwan Affairs Office offered a terse but threatening statement. "We also sternly warn Taiwan: do not rely on foreigners to build yourselves up or it will only draw the fire upon you," they wrote.

All acknowledgments of Taiwan are bound to annoy China because to Beijing, there is no country called Taiwan. There is only Chinese Taipei, a wayward province of the People's Republic of China and last remnant of the civil war that ended with the PRC's founding in 1949, that will eventually reunify with the mainland. This insistence underpins the so-called One China policy.

For all intents and purposes, though, Taiwan is a sovereign state, but to placate the mighty Beijing most nations in the world do not formally recognize it as such. Even the US does not formally recognize Taiwan — the TTA mentions the Taipei Economic and Cultural Representative Office (TECRO), which provides all the services of a Taiwanese embassy in the US but can't call itself an embassy.

After a 1992 consensus, China and Taiwan have both held that there is only one China with only one sovereign government, although naturally they disagreed on which was the legitimate China and which was the renegade.

In 2016, Tsai came into office and refused to affirm the consensus, breaking tradition with her predecessors. While she stopped short of vocally declaring Taiwan an independent state, her refusal incensed Beijing and relations broke down.

China Daily, a newspaper owned by the Communist Party of China, warned Tsai that China would not hesitate to use military force should Taiwan formally declare independence. The similarly party-owned Global Times added that China might retaliate against the law with "targeted measures against pro-independence forces in Taiwan."

"Militarily, the strength of the People's Liberation Army has fundamentally changed the military and political situation… Thanks to its rapid growth, the Chinese mainland is now granted unparalleled strategic initiative across the Taiwan Straits," the paper continued.

The Global Times went on to note that since US has vowed to defend Taiwan should China ever attack, the bill gives "substance to the observation that the descent into hell is easy."

The TTA further reflects "growing nationalist sentiment in the US in the face of China's rise," Global Times wrote. "Bellicosity has peaked in [the US] Congress and legislators approved the bill to vent their anxieties about China."

Since relations opened with the mainland in the 1970s, US leaders have played the delicate dance of supporting Taiwan without overly irritating Beijing. However, Trump, then president-elect, accepted a congratulatory phone call from Tsai in December 2016.

The call was the first time since 1979 that a US president or president-elect spoke publicly with the Taiwanese president.

Tsai has also bolstered defense ties with the US. After several provocative Chinese military exercises in the strait, in October she announced a defense spending increase of 2 to 3 percent and the purchase of US weapons. Taipei and Washington are also planning a joint defense industry conference to be held in Taiwan in May.