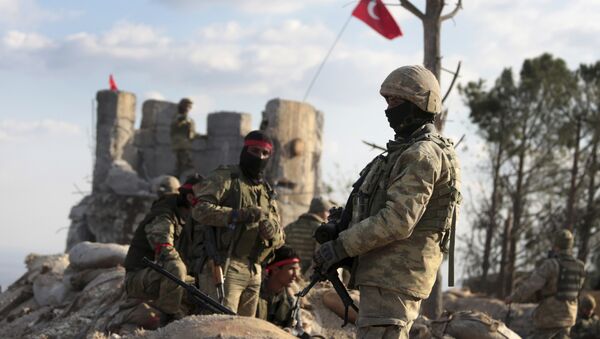 ANKARA (Sputnik) - The number of Turkish servicemen killed on Thursday during the ongoing Olive Branch operation in Syria's Afrin increased to eight, the Turkish General Staff said in a statement.

Therefore, the total losses by the Turkish army since the beginning of the operation in Afrin increased to 41.

Earlier in the day, the Turkish General Staff reported that five servicemen had been killed and seven wounded in clashes on Thursday.

"During the operation in Syria's Afrin on March 1, three more of our comrades-in-arms were killed, six more were wounded," the statement said.

'Foxhunt': Life in Kurdish Afrin's Heartland Amid Turkish Operation Olive Branch
The Turkish forces have killed or captured 2,222 members of the Kurdish People's Protection Units (YPG), the Democratic Union Party (PYD), and the Daesh terror group since the beginning of the operation.

On Thursday, the Kurdish-led Syrian Democratic Forces (SDF) urged the UN Security Council to ensure implementation of its resolution on the ceasefire in Syria, including in the Afrin region, where Turkey continues its offensive, SDF spokesperson Kino Gabriel said in a statement obtained by Sputnik.

The SDF added that their forces welcomed the resolution, but Turkey and allied groups continued aggression in Afrin.

Iran Calls on Turkey to Immediately End Olive Branch Operation
On Saturday, the UNSC unanimously adopted Resolution 2401 that urges all parties to the conflict to immediately stop all hostilities and adhere to a long-term humanitarian pause across Syria in order to ensure the safe and unhindered delivery of humanitarian aid, as well as medical evacuation of those injured.

In January, Ankara launched operation Olive Branch in Afrin, in pursuit of "clearing" the Turkish border with Syria from the terrorist threat. Turkish authorities consider the YPG and the PYD to be linked to the Kurdistan Workers' Party (PKK), listed as a terrorist organization by Ankara.