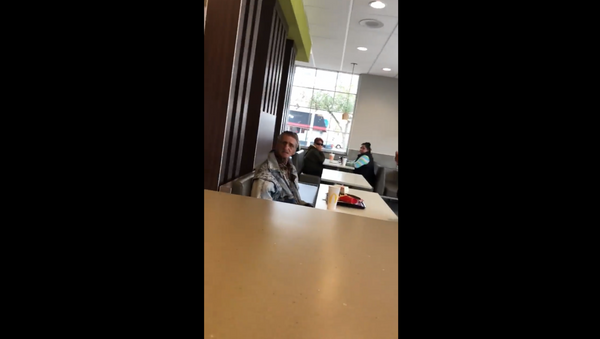 © Screenshot/ Yossi Gallo
Subscribe
On Wednesday, a customer and a homeless man were kicked out of a McDonald's in Myrtle Beach, South Carolina, by local law enforcement after the diner made the decision to buy the man a meal.

Filmed by the diner, Yossi Gallo, the video shows the moments after an officer with the Myrtle Beach Police Department arrived at the restaurant and asked the homeless man to leave the facility once he finished eating.

"Ma'am he didn't ask me for money," Gallo is heard saying in the recording. "By the way, you guys suck… he didn't even ask me for food, I brought him from outside."

"You guys suck," Gallo repeated once more toward workers before a manager at the establishment asks him to calm down.

"He didn't even ask me for food," Gallo told both the manager and responding officer. "I saw him across the street and brought him over here to get him some food."

Trying to ease the tension, the officer explained that the restaurant had only called the police because several other customers had complained about the homeless man's presence and that he'd been begging others for food. However, the situation continued to escalate and the manager ultimately asked the officer to remove Gallo as well.

The video ends with Gallo and his new friend heading out to find another place to eat.

In response to the social media outrage, Myrtle Beach Mayor Brenda Bethune posted a video to the city's Facebook page to offer an explanation and defend the officer's handling of the call.

"What you will not see on that video is the whole story," Bethune said. "I was able to watch the bodycam of the police officer that responded to the call… she treated the gentleman with dignity and respect."

"What I would like to do is encourage our community to come together and work with [homeless] shelters. Let's reach out and do everything that we can possibly do to help our homeless community and be in support of our police department."

McDonald's has not yet released a statement on the incident.

000000
Popular comments
What I noticed was the store manager was quite well built and the homeless man look pitifully thin. What I can't understand is why the manager did not take some free food out to this poor old man long before this incident occurred. Guess he will remember this incident in his dreams for a long time to come.
honestly
3 March 2018, 02:29 GMT1
000000
so make the bodycam footage publicly available.
michael
3 March 2018, 09:11 GMT
000000
Newsfeed
0
New firstOld first
loader
LIVE
Заголовок открываемого материала
Access to the chat has been blocked for violating the rules . You will be able to participate again through:∞. If you do not agree with the blocking, please use the feedback form
The discussion is closed. You can participate in the discussion within 24 hours after the publication of the article.
To participate in the discussion
log in or register
loader
Chats
Заголовок открываемого материала
Worldwide
InternationalEnglishEnglishMundoEspañolSpanish
Europe
DeutschlandDeutschGermanFranceFrançaisFrenchΕλλάδαΕλληνικάGreekItaliaItalianoItalianČeská republikaČeštinaCzechPolskaPolskiPolishСрбиjаСрпскиSerbianLatvijaLatviešuLatvianLietuvaLietuviųLithuanianMoldovaMoldoveneascăMoldavianБеларусьБеларускiBelarusian
Transcaucasia
ԱրմենիաՀայերենArmenianАҧсныАҧсышәалаAbkhazХуссар ИрыстонИронауОssetianსაქართველოქართულიGeorgianAzərbaycanАzərbaycancaAzerbaijani
Middle East
Sputnik عربيArabicArabicTürkiyeTürkçeTurkishSputnik ایرانPersianPersianSputnik افغانستانDariDari
Central Asia
ҚазақстанҚазақ тіліKazakhКыргызстанКыргызчаKyrgyzOʻzbekistonЎзбекчаUzbekТоҷикистонТоҷикӣTajik
East & Southeast Asia
Việt NamTiếng ViệtVietnamese日本日本語Japanese中国中文Chinese
South America
BrasilPortuguêsPortuguese
NewsfeedBreaking
02:30 GMTBoebert vs. 'Jihad Squad': GOP Rep. Buries the Hatchet With Squad's Omar Over Feud Caused by Remarks
01:53 GMT'As if Disney Were Entering Notre-Dame': Critics Blast Cathedral's 'Woke' Rebuilding Plan - Report
01:42 GMTMan Killed After Trying to Crash Gate of San Diego Military Base With Knife
01:07 GMTNew York Governor Declares State of Emergency Amid Spike in COVID-19 Infections
YesterdayPfizer Unsure if Omicron Evades Its Vaccine, Can Launch New One in 100 Days
YesterdayMusk Rails Against State Aid as Tesla Pulls Application for $1.28 Bln in Subsidies for Berlin Plant
YesterdayBiden Says Not Concerned About US Stock Market Plunge as He 'Expected It'
YesterdayMalawi Defends Inviting Mike Tyson to Be Cannabis Ambassador - Report
YesterdayFDA Deems Merck Pill Effective Against COVID-19 as Experts Plan to Review Safety
YesterdayThose Darned Crickets! FBI Makes Mystery 'Havana Syndrome' its Top Priority
YesterdayVideos: Shooting Prompts Lockdown at North Carolina Mall
YesterdayTrump Claims He Never Planned to Start War With China, Says Milley Should Be Tried for 'Treason'
YesterdayTrade Unionists Slam Labour London Mayor Khan Over ‘Unnecessary Strike’ Tweet
YesterdayFour Dead After Unknown Gunmen Open Fire on Bus Carrying Students in Kosovo - Reports
YesterdayBiden Confirms New Travel Bans From South Africa, 7 Other Countries Effective November 29
YesterdayMerkel Reportedly Picks Song by 'Godmother of German Punk' for Her Chancellorship Farewell Ceremony
YesterdayIranian Government Websites' Reportedly Defaced With 'Death to Khameini' Caption
YesterdayHow Biden's Summit for Democracy Causes a Cold War-Style Two-Camp Polarisation of the World
YesterdayBlack Friday Protest at 'Pandemic Profiteer' Amazon UK Over 'Abuse of Workers'
YesterdayBiden Administration Reportedly Suggests Increasing Royalty Rates on Federal Oil, Gas Leases