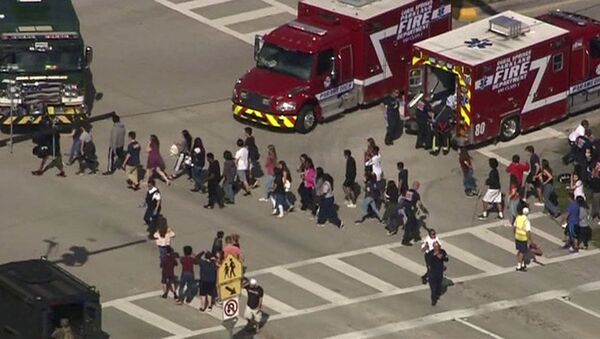 After the Parkland massacre in Florida last month US President Donald Trump said the answer was to arm teachers. But Sputnik spoke to a former ATF agent, David Chipman, who said Trump was "lacking leadership" and pandering to the gun lobby.

David Chipman, a former Bureau of Alcohol, Tobacco and Firearms (ATF) agent and Senior Policy Advisor with Giffords, the gun control lobbyists, said bringing more firearms into schools was not the answer.

"Because of the influence of the gun lobby in the United States the notion has been raised that an additional firearm would lead to a better experience in a school shooting scenario but it simply isn't the case," Mr. Chipman told Sputnik.

The debate about whether to arm teachers took an interesting twist on Wednesday, February 28, when Jesse Davidson, 53, a social studies teacher, fired at least one shot inside a classroom at Dalton High School in Georgia.

This is Jesse Davidson. He is the 53-year old teacher who fired a shot into a classroom today at Dalton High School. Students say he's one of their favorite teachers in the school.

This is why teachers shouldn't be armed. People snap, & when they have guns, bad things happen! pic.twitter.com/6zlBVAyNMi

….If a potential “sicko shooter” knows that a school has a large number of very weapons talented teachers (and others) who will be instantly shooting, the sicko will NEVER attack that school. Cowards won’t go there…problem solved. Must be offensive, defense alone won’t work!

While young people marched in Florida demanding more gun control, Trump claimed the answer was to give guns to teachers so they could "defend the school."

But Mr. Chipman said Trump, like many other people who had no military or police training, fundamentally misunderstood the situation.

If the solution to gun violence is the mere presence of a good guy with a gun, why are cops getting shot and killed up 133%? pic.twitter.com/jWfmR1gLs5

'A Teacher's Job is to Teach'

He said a teacher's job was to teach children, not to act as an armed security guard.

"I worked for the ATF and was on a SWAT team and underwent a lot of training to be able to tackle a shooter. I can't imagine that would be provided to teachers and there is this false notion that self-defense skills are the same skills as taking out a shooter in a crowd," Mr. Chipman told Sputnik.

"Dalton High School" I'm not into conspiracy theories but i will throw this out there for fun. Jesse Randall Davidson is a democrat willing to go to jail to make a point and end the debate about arming teachers…

"More guns can make things worse. The voices of young people and knowledgeable people in law enforcement are becoming louder. These are people who want to save American lives," he told Sputnik.

Mr. Chipman said Trump's comments about being prepared to run into a school where a shooting was taking place unarmed were pure "theater" and typical of the man.

"I don't know how he would respond in a real situation. But I saw how he reacted on stage during the campaign when someone tried to get on stage. He almost broke his leg running away," Mr. Chipman told Sputnik.

On social media many people have raised doubts about arming teachers, many of whom are under great stress anyway.

Jesse Randal Davidson has been charged with aggravated assault, carrying weapon on school grounds, terroristic threats, reckless conduct, possession of gun during commission of a crime, and disrupting public school.

In Wednesday's incident in Dalton, Georgia, Davidson barricaded himself alone inside the classroom and said: "Don't come in here, I have a gun," before firing a shot when the principal tried to force open the door.

He was arrested soon afterwards and nobody was injured but the incident has triggered questions about the wisdom of arming teachers.

It has since emerged that Davidson, who was also the play-by-play announcer for the Dalton High School football team, had had run-ins with the police before.

In August 2016 police were called to his home in nearby Rising Fawns after he set fire to his own car and waved a gun around.

He was never charged with any offense at that time but was reported for a mental evaluation and three guns were confiscated from his home.

They were later returned to his wife who was told not to give him access to the weapons, according to CBS News's Crimesider.

Davidson was charged on Thursday, March 1, with aggravated assault, carrying a weapon on school grounds, terroristic threats, reckless conduct, possession of gun during commission of a crime and disrupting public school.

The views and opinions expressed by David Chipman are those of the speaker and do not necessarily reflect those of Sputnik.