Wigan's Epic Win Shows the Edge Football Has Over Rugby 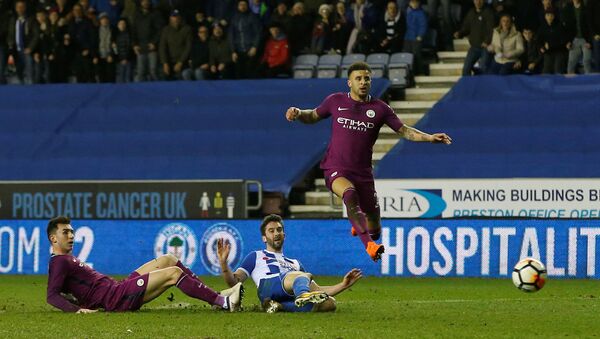 Neil Clark
All materials
Was third-tier Wigan Athletic’s fifth-round FA Cup victory over Manchester City the greatest act of giant-killing in the history of the modern game? There’s a strong case for saying that it was - even if City did have to play the second half with ten men due to a sending off.

For a start there was the absolutely stratospheric economic imbalance between the teams. Manchester City's starting line-up cost £349m (with their two substitutes costing over £100m. Wigan's line-up cost £1.83m and included eight players on free transfers.

Then there was the rampant form that City — the runaway Premiership leaders- had been in coming in to the game. Before last Monday they had lost just two matches all season — a 4-3 thriller away at Liverpool in January and a dead rubber Champions League tie to Shaktar Donetsk in December.

No team — apart from Wolves in the League Cup and Crystal Palace in the Premiership on New Year's Eve had prevented City's prolific hotshots from scoring. Prior to facing Wigan, Guardiola's men had thrashed Basel 4-0 away in the Champions League. Quite rightly, they are regarded by many judges as not only the best club side in England but the best in Europe too. Some would even say they're the best in the world.

Yet last Monday, lowly Wigan, who had lost their last two matches to Blackpool and Southend, beat them.

Viral
Black Magic? Ronaldo's Insane Penalty Against PSG Baffles the World (VIDEO)
Wigan's heroics all the more remarkable when you consider that they enjoyed just 17.5% possession and 34% of the game was played in their defensive third.

What the win shows us is the edge that football has over rugby. You can surrender possession- and have the opposition camp deep in your own half- yet you can still have one breakaway and win the match.

In rugby, if you surrendered so much territory then your opponents would kick their way to victory. It's the fact that ‘miracle' score-lines like Wigan Athletic 1 Manchester City 0 can happen, which makes football the game that it is.

How to campaign a veteran racehorse who has become a much-loved national treasure? Cue Card has been thrilling National Hunt enthusiasts for eight years now, and recorded his 40th career start at Ascot recently, when he came a gallant second behind Waiting Patiently, five years his junior.

That was an exhilarating, front-running effort, and showed that the calls for his retirement last year were premature, but are connections doing the right thing by taking him to the ultra-competitive Cheltenham Festival next month? It's a relief that they've ruled out a third tilt at the Gold Cup, a race in which Cue Card has suffered crashing falls at the same third last obstacle the last two years, and opting for the Ryanair Chase, run over a shorter distance, looks the more sensible option. However you could argue that the most sensible thing of all would be to bypass Cheltenham altogether and give the horse his racecourse swansong at Aintree in April.

Viral
What a Day for Ronaldo! Joke on Messi, Two Goals, Bleeding Face, Twitter Storm
Cue Card's form figures at Cheltenham over fences, as The Guardian's Chris Cook has pointed out are U21FF. Over fences at Aintree it's 212. In six races at Aintree his form figures are 122212. The old boy clearly is at his best on the flat-track at Aintree, and although he has won twice before at the Cheltenham Festival (in 2010 and 2013) you couldn't really say that the undulating track there plays to his strengths. In the Ryanair, Cue Card will still have his ‘bogey' third last fence to overcome and that's a big worry. Age is another factor. It's also worth noting that excluding the marathon Cross Country Chase, which has had three 12-year-old winners since 2005, horses aged 11 or over have a poor record at the Festival.

Speaking at Kempton on Saturday, Cue Card's trainer Colin Tizzard spoke of the pressure that racehorses put their owners under, when it comes to making difficult decisions where to run. That pressure is all the greater when the horse in question is the best-loved animal in training. Fingers crossed that connections, who no-one doubts have their horse's best interests at heart, have made the right call and that Cue Card makes it through to the long and happy retirement he so thoroughly deserves.

The bookies have Argentina priced up at around 9-1 for the summer football feast, and some judges would say that's not being over generous. While La Albiceleste have a great pedigree in the tournament, with five final appearances, they haven't won it since 1986 — and have only reached one final since 1990: in Brazil, four years ago, when they lost to Germany.

After 9 Years, Messi Finally Scores Against Chelsea, Shakes Twitterland
Moreover they were hardly convincing in qualifying-struggling for goals and suffering home defeats to Ecuador and Paraguay. For much of the campaign it looked like Argentina would miss out on qualifying altogether. On top of that, they're hardly in the easiest Group in Russia either. They kick off with what could be a very tricky clash in Moscow on 16th June against Iceland, the surprise package of the 2016 European Championships. The other teams in their Group are Croatia and Nigeria.

So should we write off their chances?

Not a bit of it. Argentina picked up under new coach Jorge Sampaoli, who did such a great job with Chile.

Then there's Lionel Messi. The importance of the player who Sampaoli describes as ‘the best in history' to his team cannot be overstated. Argentina won only one of the eight games the Barcelona super-star missed in qualifying. By contrast 21 of the 28 points they picked up came when Messi was on the pitch. If Messi is fit and maintains his current level of brilliant form, then you can't rule out Argentina going deep in to the competition- perhaps even to the final again. If he misses out for some reason, then it's surely ‘Adios Amigos'.

The stakes could not be higher. FIFA President Gianni Infantino has said that Lionel Messi must win a World Cup if he is to be regarded as the greatest player of all time. As he'll be 31 in June, it's probably now or never.

Next time in Sportsworld we weigh up the World Cup challenge from Africa.