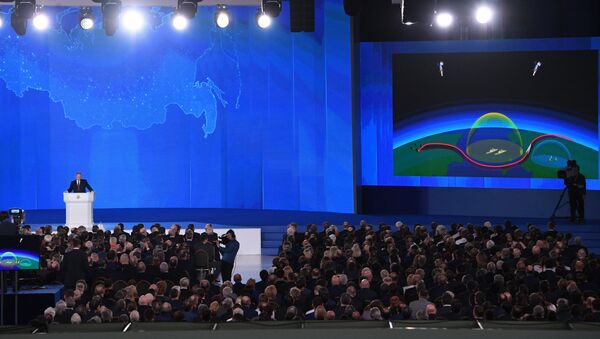 MOSCOW (Sputnik) - The recent demonstration of advanced weapon systems by Russia is a signal that the peaceful development of the nation will be secured under any circumstances, former Russian ambassador to the United States Sergey Kislyak told Sputnik on Thursday.

"These are not new rules of the game… it is a signal sent by the president that the peaceful development of our country would be ensured under any circumstances," Kislyak, who is now the first deputy chairman of the Russian upper house Committee on Foreign Affairs. said commenting Putin's words about the new weapons.

The official expressed hope that the US side would take into account the statements voiced by the president in his address.

According to Kislyak, the United States has been developing weapon systems that target Russia among others.

"In order to respond to such state of affairs, it was necessary to take steps via our national defense programs. And such steps have been taken," the former ambassador added.

The lawmaker said that at the moment the internal situation in the United States would require a lot of time and effort in order to return to a normal dialogue between Washington and Moscow, adding that he hoped that this period would be short.

Earlier in the day, Russian President Vladimir Putin during his address to the Russian parliament showed videos with a number of new advanced weapon systems.

According to the president, the move was prompted by the United States' deployment of anti-missile defense systems "both in the US and outside its borders."