On March 1, President Vladimir Putin gave his annual state-of-the-nation address to the bicameral parliament, the Federal Assembly, in which he outlined the country’s domestic and foreign policy priorities. Here are the highlights of his speech: from missile defense to artificial intelligence and beyond.

Russia 'Has Long Persuaded US Not to Violate ABM Treaty, Everything Was in Vain'

President Putin announced that Russia was creating new defense systems in response to the United States' deployment of anti-missile defense systems "both in the US and outside its borders." He proceeded to say that all of Russia's suggestions on joint work have been rejected by the US, explaining that Moscow has tried to convince Washington not to violate the anti-missile defense treaty, but all this has been in vain.

According to Putin, the US military build-up will eventually render Russia's nuclear arsenal pointless unless Moscow acts, specifying that all agreements under the New Start Treaty are gradually being undermined and devalued.

"The implementation of plans on global missile defense system, which is currently ongoing, nullify all agreements within the framework of the SNV-III treaty [New Strategic Arms Reduction Treaty, START signed in 2009] since together with the reduction of number of warheads and their carriers one of the parties, the United States, is increasing the number of interceptors, improving their characteristics, creating new positioning spots, which, if we do not take action, will lead to full nullification of Russia's nuclear potential, [all missiles] will be intercepted."

"A uniform radar location field for a missile attack alert system has been deployed along the perimeter of Russia's borders, which is very important. After the dissolution of the Soviet Union, large holes had emerged in it, but everything has now been fixed," Putin said.

'Nobody Listened to Russia Before We Created New Weapons Systems, They Will Listen Now'

"We have started development of new strategic arms that do not use ballistic flight paths, while moving to targets, which means that the missile defense systems are useless in struggle against them."

In late 2017, Russia successfully tested a completely new type of armament "unmatched in the world" — a nuclear-powered missile, Putin said. Following this announcement, Putin declared the beginning of the active phase of SARMAT missile system tests, saying that the new weapons would be invulnerable to interception as its capabilities allow it to bypass any missile defense. SARMAT will be equipped with nuclear warheads. Moreover, Russia is developing a nuclear warhead small enough to be carried by cruise missiles. In addition, Moscow has developed underwater drones capable of operating at enormous depths and intercontinenal distances, as well as created hypersonic weapons.

"No one listened to Russia before we created new armament systems, so listen to Russia now," said President Putin, saying that the country is one step ahead of other states.

Putin underscored that he hadn't revealed all the weapons Russia was working on, but this was "enough" for one day. 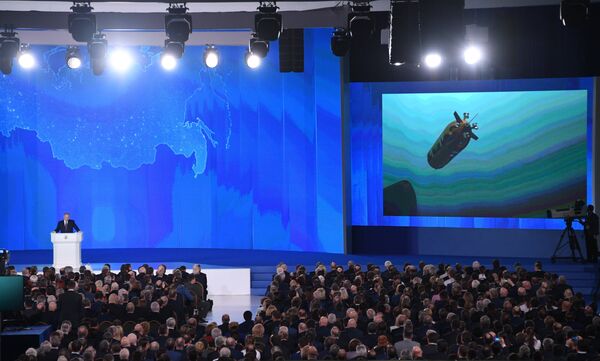 At the same time, the president clarified that all the work to enhance Russia's defense capability has been conducted within the framework of international agreements, and does not violate any deals. Putin noted that the country was not threatening anyone and had no intention of attacking anyone despite the creation of a new array of arms, including high-precision strategic weapons, which purely serve Russia's defensive needs.

Putin also noted the "enormous work" in strengthening the Russian army and fleet, which had been conducted over the past several years.

"The whole world now knows the names of Russia's modern weapons," he stated.

According to the President, the next few years will be crucial for technological changes in Russia, regardless of who wins the upcoming presidential election.

"The world is accumulating enormous technological potential which allows us to make a huge breakthroughs in improving people's standard of living, modernization of economy, infrastructure and state governance… The efficiency of how we use the great potential of the technological revolution… depends on us only. In this context, the next few years will be decisive for the future of the country," Putin said.

Having stressed that lagging behind was a serious problem that should be overcome, President Putin stated that Russia was ready for a technological breakthrough. 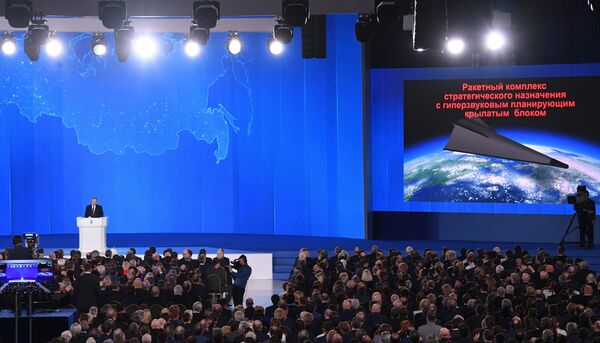 Putin called for removing all barriers hindering the development of robotics and artificial intelligence in Russia, adding that the legal framework for the work of foreign scientists and IT specialists should be formed in the country.

"Russia should become not only a key logistics hub of the planet, but, let me stress, one of the global centers of storage, processing, transmitting and protecting large information blocks, the so-called big data," Putin stated, underscoring the urgent need to take into consideration global technological changes when developing the country's infrastructure, the importance of adding such solutions as digital navigation, drones, artificial intelligence.

Among the key issues of Russia's internal policy, the president highlighted the need to improve the quality of people's lives, boost the financing of maternal welfare and young families, as well as cuting in half the "unacceptable" poverty rate within six years.

He gradually went on to address demographic problems, saying that Russia should take measures to support elderly people and increase life expectancy, with a big screen behind him showing graphs to accrue to his words.

Russian President Putin Annual Address to Federal Assembly (VIDEO)
"The life expectancy has risen by more than seven years [since 2000] and amounts to 73 years but this is not enough. Today we must set a principally new goal: by the end of the next decade Russia must enter the 80+ group of states where life expectancy exceeds 80 years," Putin said.

"We have to respond to [demographic] challenges and in the next decade ensure sustainable growth of the Russian population… Overall we have to allocate at least 3.4 trillion rubles to protect maternity and childhood in the next six years," Putin said in his annual state-of-the-nation speech.

"Russia should not only to shore up a position in the top five largest economies of the world, but increase the GDP per capita by 1.5 times by the middle of the next decade. It is a very complex issue. I am sure that we are ready to resolve this issue."

"New technologies are to be introduced in the production, storage and transfer of energy. In the coming six years, it is planned to attract a total of 1.5 trillion rubles in private investment for the renewal of the power industry," Putin said in his address to the Federal Assembly.

Other priorities for coming years #Putin sets is to increase financing for social sphere, to create sources & conditions for economic https://t.co/j2CKYiAWWk do it, he proposes (1) raise workforce productivity (2) attract investments (3)development of small/medium businesses

Also, Putin elaborated that Russia's economy should boost its growth rate above the average world level, which, in his own words, was a complicated task and a key issue for the new government, insisting that the low inflation rate gave the country additional incentive for economic development. In addition, he noted that the growth of  labor efficiency should be no less than 5% a year, in order to be at the level of the leading world economies in 10 years.

Watch the entire video broadcast of Putin's address to find out more.

The 2018 address of Russian President Vladimir Putin to the Federal Assembly, country's parliament, has broken record in terms of duration and lasted for one hour and 57 minutes.