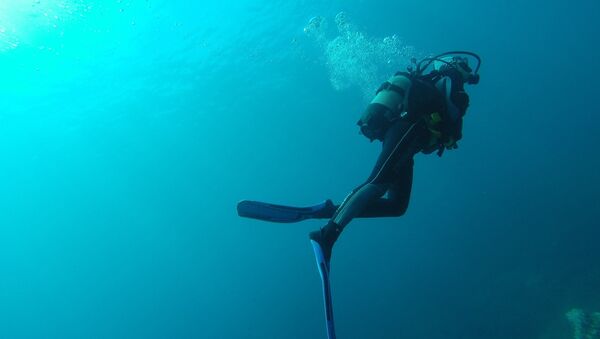 A mass burial site dating to roughly 5,000 BC has been discovered near the Florida coast.

Florida's Bureau of Archaeological Research reports that a mass Native American burial site has been discovered in the Gulf of Mexico near the city of Venice. There, remains of people who died thousands of years ago were perfectly preserved underwater.

Viral
This is What Prehistoric Eurasian People Looked Like 30,000 Years Ago (VIDEO)
The site was discovered in 2016 by an amateur diver who was looking for shark's teeth but, to his surprise, found a human jawbone instead. When the diver sent a picture of his discovery to archaeologists, they recognized that a molar tooth on the bone was worn out — a clear clue that it had come from a prehistoric man.

"That's something we don't see in modern populations," Ryan Duggins from Florida's Bureau of Archaeological Research told National Geographic, "so that was a quick indicator we were dealing with a prehistoric individual."

Upon further investigation, it turned out that the place was actually a burial site. Scientists believe it covers some 32,000 sq feet (3,000 sq meters) off the coast of Manasota Key. The site was named Manasota Key Offshore (MKO).

​The remains of six individuals have been discovered so far, including a broken arm bone and pieces of skull. In addition, the scientists also unearthed pieces of prehistoric culture: a collection of carved wooden stakes and textile fragments that radiocarbon tests date to around 7,000 years ago.

The discovery is a reminder that ocean levels are not static. The underwater site used to be above sea level and was covered with peat, which allowed the remains to stay so perfectly preserved for several thousand years.

The archaeological site appears to be similar to another one located on the other side of the Florida peninsula. Discovered in the 1980s, the Windover Archaeological Site is an ancient muck-pond where the skeletal remains of 168 individuals from a similarly distant era were found buried, preserved in peat at the bottom of the pond.

According to the bureau's press release, the scientists believe that MKO site was a similar freshwater pond where the locals buried their dead. When the waters of the Gulf of Mexico rose, they covered the pond, but the peat bottom remained intact.

"Our hope is that this discovery leads to more knowledge and a greater understanding of Florida's early peoples," said Florida Secretary of State Ken Detzner.

The state also says it understands that MKO is a burial site and that it is prioritizing proper treatment of the remains.

"We are happy to be working, shoulder to shoulder, with the Bureau of Archaeological Research and the residents of Manasota Key to identify a preservation plan that will allow the ancestors to continue to rest peacefully and without human disturbance for the next 7,000 years," the Seminole Tribe of Florida's historic preservation officer Paul Backhouse told the Bradenton Herald newspaper.