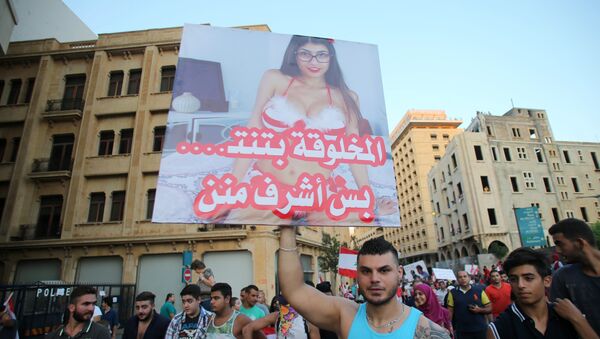 Former adult film star Mia Khalifa has revealed that she was forced to quit her job after receiving death threats from the Daesh terrorist group.

The 25-year-old Lebanese-American star, who became PornHub’s most searched-for actress during her X-rated career, has drawn much criticism from many in the Middle East who branded her a stain on the region.

Speaking on disgraced cyclist Lance Armstrong’s The Forward podcast on February 27, Khalifa admitted the real reason for leaving her career for good.

“It all started to spiral out of control when the death threats from ISIS [Daesh] started coming in. That's when I stepped away. As soon as I started to gain popularity that's when I was like 'get the f*** out of this.' This was not what I was trying to do whatsoever. I just wanted to let loose and rebel a little bit,” she said.

Two of the most opposite Austin-ites got together and talked being bonded by our status as social pariahs. Utterly humbled by the experience of sharing my story and journey with @lancearmstrong on his podcast, and if y’all haven’t already, check out the link in my bio to listen & subscribe to #TheForward.

Wall Star ⭐️ Link in my bio to join my Patreon and get exclusive access to these galleries! Not to mention, my private Instagram @miakpatreon, signed posters!!, My monthly member live streams, and so much more!!!! (📸: @blaisejoseph_)

Wear my heart on my sleeve #TheDCSportsGirl