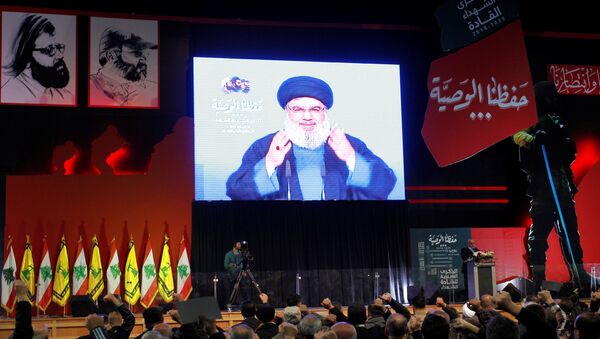 Hezbollah, which is Lebanon's de facto military force, is regarded as a terrorist organization by a number of countries, including Israel, the US, Canada and the Arab League.

Killing Sayyed Hassan Nasrallah, the head of Lebanon's Hezbollah movement, would be a "decisive victory" in a future Israeli war against Lebanon, Major General Yaakov Barak said Wednesday as quoted by the Haaretz news outlet.

"If we manage to kill Nasrallah in the next war, I would see that as reaching a decisive victory," Barak said.

According to the Israeli military official, a potential future war with Lebanon will be different, as Israeli forces are "ready and prepared" to penetrate deeper and quicker into Lebanon's territory.

"The next war will not be a war of several days, but it won't last several months either," Barak noted.

The general's comments come several months after the Israel Defense Forces (IDF) chief spokesperson acknowledged that his country was already engaged in "psychological and media warfare" against Lebanon's Hezbollah and that Hassan Nasrallah, "would be a target for assassination" in any war between them.

Hezbollah Deputy Chief Vows to Defend Lebanon From Israel
Relations between Israel and Lebanon haven't been smooth as a result of Israel's invasions of Lebanon in 2000 and 2006. The strained relations have been further exacerbated following Israeli plans to build a wall along Lebanon's southern border, as well as disagreements over the eastern Mediterranean gas field.

Lebanese authorities describe the move as a "direct threat to stability," urging its neighbor to stop the construction.