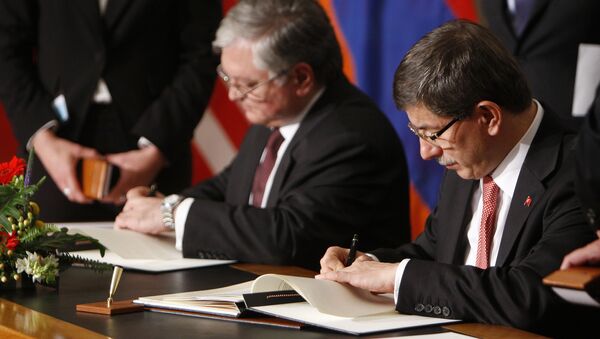 Armenia initiated negotiations with Turkey back in 2008 in a move to normalize bilateral diplomatic ties, signing a protocol in Zurich a year after.

Armenia has scrapped a peace deal that it signed with Turkey back in 2009, president's spokesman Vladimir Hakobyan said as quoted by Armenian Yerkir Media TV.

Armenia's Foreign Ministry spokesman Tigran Balayan, in his turn, wrote on Twitter that the Armenia-Turkey protocols was "null and void."

In 2009, the foreign ministers of the two countries signed the protocols in Zurich, which were pending ratification by the countries' parliaments.

However, in December 2009, then Turkish Prime Minister Recep Tayyip Erdogan stated that Ankara would not ratify the accords until the Nagorno-Karabakh conflict was resolved.

In April 2010, Armenian President Serzh Sargsyan suspended ratification process accusing Ankara of showing no will to continue the settlement process. In September 2017, the Armenian president said at the UN General Assembly that Yerevan would declare the Protocols null and void in the spring of 2018, if no progress was made.

The Armenian-Turkish relations are negatively influenced by what is recognized as the genocide of Armenians by Turkey. Around 1.2 million Armenians were killed or starved to death by the Ottoman Empire during and after World War I.

Turkey has repeatedly denied accusations of committing mass murder of Armenians, claiming that the victims of the tragedy were both Turks and Armenians.