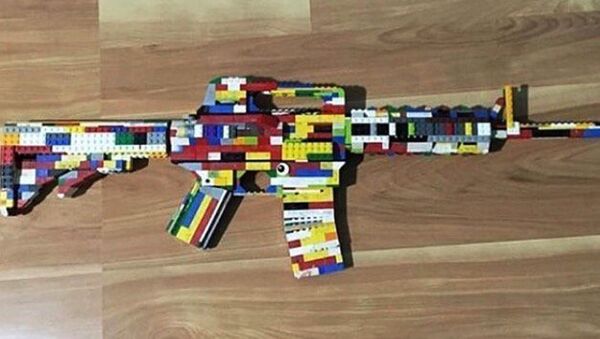 A high school student’s arrest comes hot on the heels of mass shootings in multiple states of the US.

An unnamed 14-year-old boy from San Diego who posted a photo of AR-15 replica made of Lego on Instagram with the caption "don’t come to school tomorrow," probably didn’t expect any reaction from the town’s officials, but he surely got one. Police arrested him the next day on charges of making a criminal threat.

The San Diego County Sheriff's Department wrote in the official statement that according to their information, the arrested boy had access to hunting rifles and it is currently being checked whether he had access to other weapons.

The news has set Twitter ablaze, with many users furious over police reacting to a Lego gun post in the Instagram, but neglecting signs indicating upcoming school shootings in the past.

"With the high-velocity rounds of the LEGO AR-15, "it’s as if you shot somebody with a Coke can."

Is this America or England? @FBI can't act on #NicholasCruz but they can find the lego gun kid? #ParklandShooting #FalseFlag #WednesdayWisdom https://t.co/fuk0X32S0b

Dumbest thing ever….
You ruined a kids life over a Lego gun….

I mean, this kid basically says: “Haha, I shoot you all with my Lego gun!!11!” That’s probably not funny, but it’s not the police’ job to round up teens with poor humor.

Is this a joke? You arrested a kid for building a Lego gun?

Few people noted though it was boy’s mistake to post such things after what the US schools been through recently.

Nikolas Cruz, a former student at Marjory Stoneman Douglas High School in Southern Florida, entered the school with AR-15-style rifle on February, 14 and opened fire, claiming lives of 17 people and leaving 14 injured. The FBI later admitted it was tipped off about Cruz’s possession of guns and erratic behavior, but took no further actions.

It was the 17th mass shooting at the US schools this year and so far the deadliest since 2012, when 20 students and teachers were killed in Newtown, Connecticut.