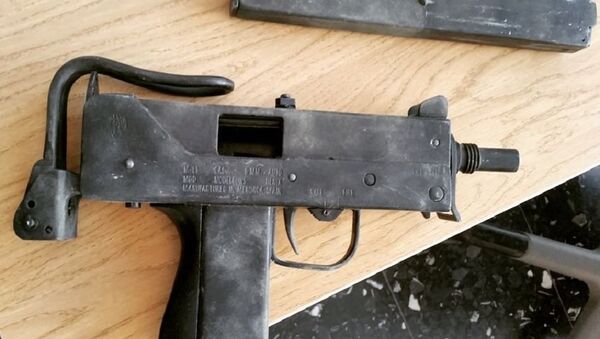 © Photo : polisenstockholm / instagram
Subscribe
The Stockholm police have received their fair share of ridicule on social media after posting a picture of a replica gun reportedly handed in amid an ongoing "arms amnesty." This gaffe also fueled skepticism about the efficiency of the amnesty as such.

"Another illegal weapon off from the streets. This weapon was handed over to the police in Botkyrka under the ongoing arms amnesty," the Stockholm police wrote on its Instagram page, posting a picture of a weapon-like object lying on a table.

The problem is that the "illegal weapon" turned out to be a replica made by the Spanish company Denix. This is apparent from the inscription "model gun" on its side. The name of the company and the origin of the replica gun, Menorca, are also shown in in the engraved text.

James Llull, export manager at the Spanish company Denix, is surprised that someone can believe that their replicas are genuine. "They are true to the appearance, of course, but not the functionality. The trigger and the hammer's functions are just simulated," he told the Sanhällsnytt news portal.

According to Llull, it is fully possible to take it for a real weapon from a distance, but once you come closer, it becomes apparent that it's a replica, even more so once you take it in your hand.

"Replicas are not made in steel but in zamak. It's an alloy between zinc and aluminum, a soft metal that makes its use in arms impossible," Llull explained.

However, Swedish users were observant enough to point out the police's mistake. People pointed out that it was a "toy weapon" as it appears from the inscription, and asked the police to zoom in. Users also questioned the police's weapons knowledge.

"Do you also count water pistols as illegal arms?" a user asked wryly.

Furthermore, many doubted the efficiency of the arms amnesty, which came into force on February 1 and will continue until April, accusing the police of peddling propaganda and make people believe that criminals were actually voluntarily submitting their weapons.

The police retorted by stressing that about 600 weapons or weapons parts had been submitted in Stockholm alone, most of them being shotguns and rifles, but also pistols and revolvers.

"It is quite possible that we can get in arms that are replicas. These can be used in criminal environments to spread terror among those against these weapons are aimed. License-free replicas will not be included in the statistics on handed in weapons," the Stockholm police later explained.

READ MORE: Please Hand In! Sweden Encouraging Criminals to Give Up Grenades