Lavrov: 'Unacceptable' to Divide Terrorists Into 'Good and Bad Ones' 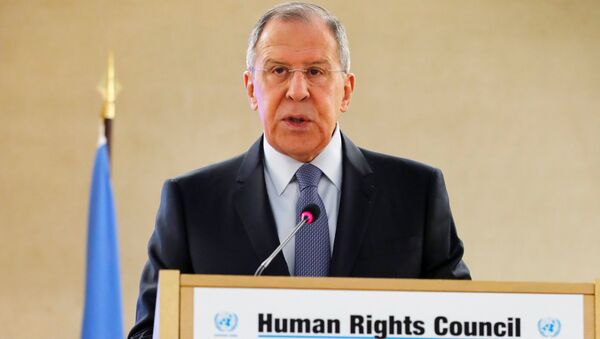 Russian Foreign Minister Sergei Lavrov has spoken about the international terrorism as well as the current situation in Syria during his address to the High-Level Segment of the 37th Session of the Human Rights Council in Geneva, Switzerland.

Some members of the UN Human Rights Council aren't ready to condemn the international terrorism under the pretext of upholding the freedom of speech, Russian Foreign Minister Sergei Lavrov said, adding that the international community shouldn't divide terrorists on "good and bad ones."

"The manifest unwillingness of some Council members to unequivocally condemn international terrorism in all of its forms and manifestations under the pretext of upholding freedom of expression is striking. We believe that dividing terrorists into the ‘good' and ‘bad' ones is unacceptable, especially when it is done depending on the extremists' proclaimed objectives or sources of financing," Lavrov said.

The minister added that Russia would continue fighting against such double standards.

"Russia continues to fight this vicious practice of double standards and supports the Syrian army in its move to destroy terrorism," Lavrov added.

Moscow calls for the urgent deployment of a mission of the United Nations or the International Committee of the Red Cross to assess the situation in Syria’s Raqqa.

“It is also necessary to urgently dispatch a joint UN-ICRC assessment mission to Raqqa, which has been bombed to rubble and left to the mercy of fate by the coalition, with minefields uncleared and infrastructure fully devastated,” Lavrov said.

On Monday, Russian Defense Minister Sergei Shoigu said that Russia was proposing setting up a UN-led international humanitarian commission to assess the situation in Raqqa.

On Escalation in Eastern Ghouta

Speaking about the situation in Syria, the head of the Russian foreign ministry said that militants in Syria's Eastern Ghouta were hindering the supply of humanitarian aid to the area as well as the evacuation of civilians by continuing shelling Damascus.

"The people of Syria today face the direct humanitarian crisis. UN Security Council Resolution 2401 has established a framework for all parties to agree upon conditions to alleviate the plight of civilians throughout the territory of the country. Russia together with the Syrian Government has already announced the establishment of humanitarian corridors in Eastern Ghouta. Now it is the turn to act for militants entrenched there, who still continue shelling Damascus, blocking aid deliveries and the evacuation of those wishing to leave, as well as for their sponsors," Lavrov said.

Lavrov continued by saying that Russia was urging the US-led international coalition to ensure humanitarian access to the areas in Syria under its control, including Rukban refugee camp and the area surrounding al-Tanf.

“We call upon the members of so-called American coalition to ensure the same humanitarian access to the areas in Syria under their control, including the Rukban refugee camp and the entire territory surrounding al-Tanf,” Lavrov said at the 37th session of the UN Human Rights Council.

The Russian Foreign Minister expressed concerns over the US decision to keep the infamous detention center at Guantanamo Bay, located in Cuba, open.

"The fight against terrorism must be based upon the solid foundation of international law and national legislation. In this regard we are gravely concerned by the decision of the US Administration to keep open the illegal prison in Guantanamo, where detainees held without charge or trial are regularly subjected to torture," Lavrov said speaking at the UN Human Rights Council.

In January, US President Donald Trump announced during his State of the Union address that he had signed an executive order to keep the center open.

'Guantanamo Be Closed': Anti-War Groups to Hold Massive Rallies in US
The facility has long been criticized for the mistreatment and abuse of detainees, prompting many to call on US authorities to close the facility. It has housed suspected terrorists from Afghanistan, Iraq, Saudi Arabia, Yemen, and other countries since 2002, many of them without charge.

Of 714 detainees released from the prison, 532 were freed by President George W. Bush and the remainder by President Barack Obama, who unsuccessfully tried to close the facility. As many as 41 prisoners remained when Trump took office.