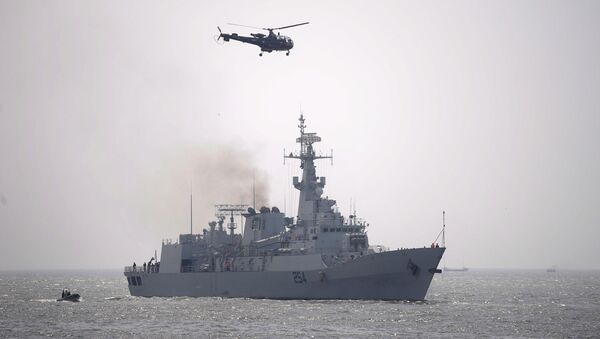 © AFP 2023 / RIZWAN TABASSUM
Subscribe
International
India
Africa
Pakistan has launched major naval exercises to practice warfare against a numerically superior foe. Analysts have observed that the exercises are the latest thrust from Islamabad to improve their naval warfighting capabilities as tensions with India and the US (which happen to be numerically superior forces) ramp up.

Exercise Ribat kicked off on Saturday at the port city of Karachi. Vice Admiral Kaleem Shaukat, the vice chief of naval staff, claimed that the exercises were meant to practice fighting a superior force at sea. He urged the seamen to remember that Islamic history is full of incidences of Muslim forces defeating numerically superior foes via strategy and faith in Allah.

In a press release, the Pakistani Ministry of Defense added that the purpose of the exercises was to practice "war-fighting concepts under evolving multifaceted threats ranging from conventional to subconventional warfare," as well as enhance Navy/Air Force cooperation "at extended ranges into the Arabian Sea."

The rapidly developing geopolitical chess game in South Asia has thrust Pakistan into a role that outpaces their military or economic strength. They are the primary ally of China against the US-backed Indian bloc. While the US and Pakistan do cooperate against Islamist militant groups such as the Taliban in Afghanistan, their relationship has become increasingly strained as Washington accuses Islamabad of harboring militant groups in their own borders.

"With Chinese reach extending to the northern reaches of Arabian Sea, Pakistan has become an unwitting player on the maritime scene, which involves big powers including US and India, and needs to pay greater attention to maritime strategy, though continental strategy will continue to remain dominant due to the territorial dispute of Kashmir," said military analyst Kaiser Tufail to Defense news.

Kamal Alam, a Pakistan analyst at the British think tank Royal United Services Institute, told Defense News that Islamabad is concerned that their aging fleet is no match for the rapidly modernizing forces of their chief geopolitical rival of India. Pakistan's ultimate goal, according to Amal, is to transform their navy from a "defensive force into an offensive one."

The two nations have gone to war four times and been embroiled in dozens of skirmishes since they were partitioned in 1946, but the Pakistani navy has rarely played a major role in those conflicts. During the 1971 War, the Pakistani navy was virtually obliterated by their Indian counterparts, and during the most recent major conflict, the Kargil War of 1999, the only Pakistani ships to see action were submarines sent on patrol missions.

Pakistan's navy is woefully outdated. Most of their frigates are refurbished US or British vessels built in their 1970s, aging ships with aging technology that offers little recourse against state-of-the-art Indian anti-ship missiles like the BrahMos supersonic cruise missile, the fastest supersonic missile ever built.

Islamabad is also seeking to acquire new missile and patrol boats to replace their aging fleet and protect their burgeoning maritime economy. However, Islamabad refused to comment on the status of these acquisitions, or who they intend to buy from.

However, in 2015, they inked a contract with the state-owned China Ship Trading Company to build six patrol boats.