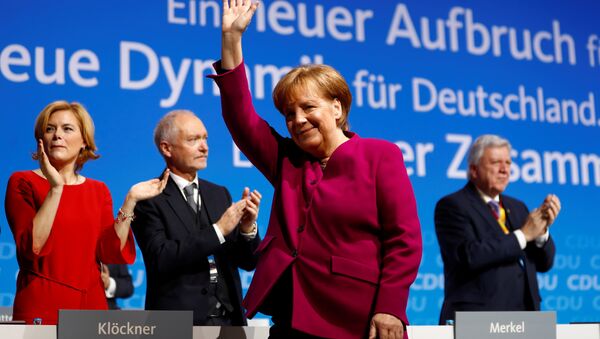 Speaking with the RTL broadcaster earlier this week, Merkel admitted that there were certain areas in Germany where people were afraid to go, adding that the arrival of such a great number of refugees to the country raised "multiple questions."

"Is Madame Merkel starting to understand the consequences of her foolish policy of mass immigration? It seems so because she has just admitted that Germany now has 'zones [where there is no law].' She even admits that their existence started to be sensed only after the arrival of 'so many refugees.' This confession proves to what extent Mrs. Merkel has harmed her country and did not fulfill her first obligation: to protect Germany," Lebreton said.

Merkel has been defending her method of handling the migration issue under what she described as "extraordinary" circumstances. However, the chancellor's "open-door policy" has prompted criticism from those concerned over how the country's security situation has worsened since the mass influx of migrants in 2015.

Joerg Meuthen, a European parliament member from the right-wing Alternative for Germany (AfD) party, supported Lebreton's views, stressing that Merkel could have reacted to the exacerbated situation earlier.

"Wisdom seems to have come very late to Mrs. Merkel. The acknowledgment of ‘no-go zones’ in Germany unmistakably shows how precarious the situation has become in certain German neighborhoods since [the time when] Mrs. Merkel opened the borders for hundreds of thousands of economic migrants," Meuthen told Sputnik.

Since 2015, Europe has been experiencing its worst migration crisis in recent history, struggling to accommodate hundreds of thousands of migrants and refugees who have fled hostilities in the Middle East and North Africa.

The issue of "no-go zones" was also raised in France in 2015, when Fox News reported on the existence on such zones in Paris, where non-Muslims and even police were afraid to enter. The claims, however, were denied by the city's mayor, Anne Hidalgo, who threatened to sue the television channel over false reports.

The views and opinions expressed by Gilles Lebreton do not necessarily reflect those of Sputnik.