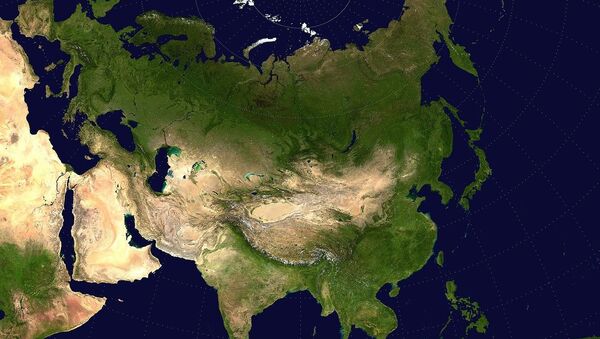 The Eurasian People’s Assembly, a nonpolitical goodwill building movement, believes that countries of Europe and Asia have strong reasons to work together despite differences. Andrey Belyaninov, Secretary General of EPA spoke exclusively to Sputnik in Delhi where they are on a week-long visit to engage with cross-sections of Indian Society.

New Delhi (Sputnik) — If people are engaged in shaking hands, there will be none left to take up arms — this is what the secretary-general Andrey Belyaninov of the Eurasian People's Assembly feels. Talking exclusively to Sputnik, Belyaninov underscored the need for fostering greater goodwill among the peoples of Europe and Asia in order to establish lasting peace. Bernard Loze, co-chair of the assembly, is also of the opinion that only goodwill and unity can help Eurasia end strife and struggle.

The Days of The Eurasian Peoples’ Assembly will be held from February 26 till March 03 in India, Delhi Dear colleagues! Friends! | Ассамблея Народов Евразии https://t.co/QmBmUQ6LoW через @

"Conflict situations are of different natures. Mostly, conflicts are the origin of another conflict and politicians are the reason for it and people are the sufferers," Belyaninov told Sputnik.

When asked if he was hopeful of the new generation overcoming boundaries and limitations to build up friendship among nations, he opined that modern communication technologies, which were supposed to be unifying, were also influencing the youth in a negative way and that it is a matter of grave concern.

"Young people today are hooked to computers with no clue about reality. Some people say narcotics and internet are the two biggest problems faced by the youth today. Modern technology should be used in a positive way to build goodwill," Belyaninov said.

Meanwhile, Bernard Loze, co-chair of the General Council of the Eurasian Peoples' Assembly and vice president of the Association French-Russian Dialogue (France) said that the peoples of Europe and Russia are bound together with a common history of cooperation and trade and there are strong reasons for the countries to work closer, despite political differences.

"There are big mountains and issues between countries in Europe and Asia, but we belong to the same land mass with a common shared heritage and we need to pass on to our grandkids a better world than what we have today. This is possible when people know each other and appreciate each other," Loze told Sputnik.

The Eurasian People's Assembly, after its revival in 2017, first met in Moscow and was attended by 2,500 delegates from 67 Eurasian countries. The official languages of the assembly are English and Russian. The assembly strives to form a public integration model for the Eurasian countries on the basis of cultural and ethical principles for the sake of peace and harmony via multilateral cooperation and public diplomacy or people's diplomacy.

The views and opinions voiced by the speakers do not necessarily reflect those of Sputnik.