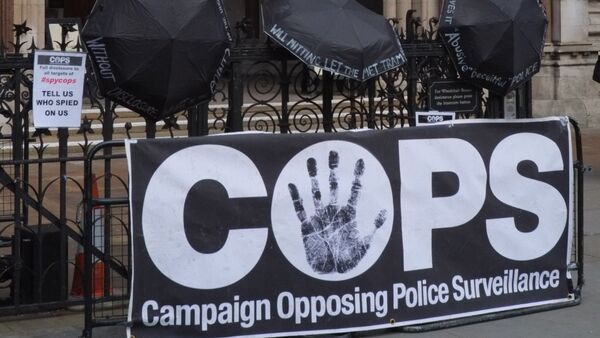 © Sputnik / Kit Klarenberg
Subscribe
In May 2017, Deputy Police and Crime Commissioner for Cambridgeshire Andy Coles resigned after it was revealed he'd engaged in inappropriate sexual activity while spying on animal rights protesters in the early 1990s. Speaking exclusively to Sputnik journalist Kit Klarenberg, an activist he deceived into a relationship tells her story.

In 2010, it was revealed undercover British police had spied on hundreds of thousands of citizens and thousands of protest groups over the course of 50 years, along the way engaging in criminal activities such as identity theft, perjury, undermining activists' democratic rights, deceiving of women into long-term relationships, and somehow much, much more.

Since then, many 'spycops' have been unmasked, primarily due to the diligent digging of independent investigators such as ARSpycatcher and Undercover Research Group.

In several cases, their work has confirmed contemporaneous suspicions that certain activists were not all they seemed. One such figure of misgiving was Andy Davey, involved with animal rights activist groups in South London from November 1991 to February 1995.

While ARSpycatcher fingered Andy as an undercover police officer in a February 2014 blog post, it was not until January 2017 the accusation was conclusively established. Confirmation stemmed from a most unlikely source — the autobiography of Reverend Richard Coles, a pop star in 1980s band The Communards turned Anglican priest and minor celebrity.

Researchers began contacting activists who'd known Andy. Quickly, a picture emerged of a self-effacing individual not well-liked or trusted by his 'fellow' activists, with a reputation for lecherous, inappropriate behavior towards women.

One such activist was "Jessica" (a pseudonym), who'd engaged in a romantic relationship lasting over a year with Andy from early 1992 onwards. While revelations about state-sanctioned spying on activists shocked her to the core, she didn't deny to herself that her ex-boyfriend was a former spycop, even for a second.

"There was no part of my mind saying 'that can't be right'. It explained a lot. There was always something not quite right about him, although I didn't suspect he was an undercover per se. In a sense, it resolved some questions for me — but raised countless new ones, which haven't been answered. It truly is like something out of a far-fetched fictional thriller, and has been an absolute nightmare," Jessica told Sputnik.

Jessica didn't sleep or eat for days afterward, and the revelation has triggered all manner of "adverse reactions" within her ever since — not long after, she was prescribed medication for depression.

Like other activists romantically targeted by spycops, she feels she could not have given informed sexual consent. In November 2015, the Metropolitan Police issued an apology, admitting undercover officers' affairs constituted "a violation of women's human rights, an abuse of power and caused significant trauma" — and offered sizeable compensation to a number of women deceived into relationships with undercover officers.

At the very least, Jessica feels her youth and vulnerability were exploited by Andy Coles, and she was manipulated into a sexual relationship with an acting police officer 13-years her senior, whose real name she didn't know.

Sputnik contacted Andy Coles for comment, but as of February 28 is yet to receive a response.

When the pair met, Jessica — then 19 — was an animal rights activist based in East London, in a house shared with other activists. Having crossed paths with Andy on a few occasions, one night he pitched up unannounced and uninvited at their front door.

"I felt it was a bit weird for him to be turn up without warning because we didn't know him, but as a friendly bunch we thought why not invite him in. We felt sorry for him — he seemed shy and never spoke up at meetings, he just didn't seem to fit in with the circle. We thought perhaps he was having trouble making friends. He kept on turning up after that…" Jessica says, a tone of violation in her voice.

On one such visit, Andy made a sexual advance on Jessica.

"I didn't know how to react. I felt no romantic feelings for him at all, but he was so determined. I was embarrassed, awkward, and didn't want to hurt his feelings, somehow. I was a very young 19, inexperienced and naive, and I lacked the tools to reject his advances. Had I been older, it would never have happened. It certainly wouldn't have happened if I'd known his real age, let alone that he was a police officer," Jessica told Sputnik.

Andy presented himself to Jessica as 24 — he was in fact 32, and had been married for four years when they met. It was Jessica's first proper relationship, and Andy met her parents on several occasions. Unbeknownst to her, during the courtship Andy developed his lecherous reputation.

On one occasion, he made a move on London-based animal rights activist "Joy" after turning up unannounced at her flat at 11pm. She allowed him to enter out of politeness, but soon after he made a pass at her with no preamble, lunging and trying to kiss her. Despite pushing him away, he persisted for several minutes, following her round the living room, while she avoided contact and repeatedly asked him to stop. He eventually relented and left.

Another activist, "Emily", was a concerted subject of his lascivious intentions — she believes she was targeted due to her friendship with several high-profile animal liberationists outside of London. True to past form, Andy arrived uninvited at Emily's flat one evening, sat next to her on the sofa, and placed his hand on her knee and tried to kiss her. This attempt was rebuffed, and he departed.

Later that year, Emily was preparing to leave London, and needed a place to stay on her last night. Andy invited her to camp at his bedsit, an offer she reluctantly accepted. There, he insistently tried to initiate sex, despite her making abundantly clear she wasn't interested.

It has also emerged Andy targeted female activists while infiltrating the Active Resistance to the Roots of War (ARROW) group in early 1991, prior to his animal rights group deployment.

On one such occasion, Andy drove someone also named Emily home from an event, staying with her until the early hours of the morning.

"It was late, I was tired and I wanted to be in control so, mischievously, asked if he wanted to stay the night. He was very eager. I told him he could have a mattress on the floor. At that point, he left in a rage. I used to tell this as my funny 'I-bet-he-was-an-infiltrator' story…now this is not a funny story. There was a cop grooming me to gain an operating base in the peace movement," Emily has written.

Jessica eventually broke off the relationship in August 1993.

"I thought if this is what being in a grown up relationship is, I'm not interested. It felt like being old and married — we didn't go anywhere together or do anything, really. It was a boring, dead, awful relationship. Andy was very one-dimensional, with no personality. It wasn't working for me, there was no feeling there. Looking back, it's obvious he not only didn't love me, but probably didn't even like me," Jessica told Sputnik.

Back to Haunt You

Andy Coles resigned as Deputy Police & Crime Commissioner for Cambridgeshire May 15 2017, following his exposure. He remains a Conservative councillor, although the Annual Council Meeting held a week after his resignation as Deputy Comissioner quietly removed him as the Conservative Group Press Officer.

Jessica is astounded he hasn't stepped down from his latter role — and cannot believe he took up the positions in the first place.

"His arrogance is unfathomable. He accepted those jobs after several spycops had been exposed, including Bob Lambert, who was busted precisely due to his public profile and visibility. Either Andy thought he wouldn't be found out, or didn't think he'd done anything wrong. There's certainly no sense he has any remorse about his actions. Plenty of other spycops have made public statements of apology, whether they mean them or not, but he's been completely silent," Jessica told Sputnik.

A campaign group, 'Sack Andy Coles', was established October 2017 — the association organizes protest actions aimed at spreading public awareness of his past conduct, and unseating him from the council. A major demonstration is planned for March 7 at Peterborough Town Hall — if that effort is unsuccessful, another will be held April 18. 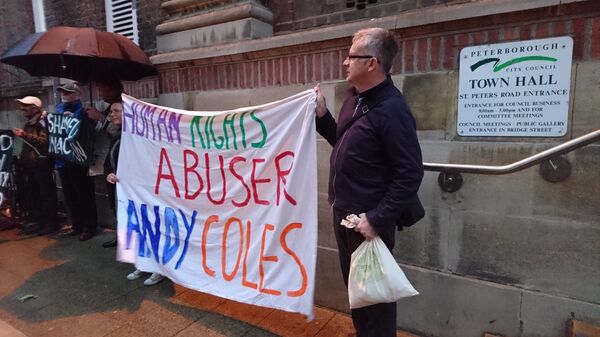 Protest at Peterborough Town Hall against Andy Coles, banner made by Jessica © Sack Andy Coles 2017
© Photo : Jessica © Sack Andy Coles 2017
Jessica is taking a leading role in the actions, and pursuing a civil action against the police, seeking answers to burning queries. She wants to know when the police started spying on her, whether they created files on her family, what information Andy had going in, and how extensive his surveillance of her was — was she recorded when she went round to his flat, and/or covertly photographed and videotaped?

For instance, he seemingly knew she was adopted, which she'd told no one, least of all him — he'd told friends of Jessica's her parents were happy about their relationship because they were both adopted. She thinks it likely he had access to her private medical records, or investigated her parents at the very least.

"Knowing the extent of it is crucial. I can't understand why we were targeted — a small group who'd often struggle to get enough people together just to hand out leaflets. Did these spycops play agent provocateur? I'd imagine a lot of the groups they infiltrated were quite quiet, so undercovers would provoke and carry out protest actions, just to have something to report back on. That most spycops had vehicles, perfect for ferrying equipment or people to demonstrations and the like, is notable in my view," Jessica told Sputnik.

There is an ongoing official investigation into undercover policing in England and Wales — the Undercover Policing Inquiry (UCPI). Established by then-Home Secretary Theresa May in March 2015, it seeks to examine the contribution undercover policing has made to tackling crime in UK, its supervision and regulation, and the effect on individuals who came into contact with undercover officers. Jessica is a core participant, but has no optimism about its prospects.

"[UCPI Chair Sir John] Mitting believes all the police's ludicrous justifications for secrecy. He frequently says 'I can't tell you that, and I can't tell you why I can't tell you that'. It's fundamentally not a public inquiry — we're not being told key information we have a right to know. I don't think he realises the pain he's causing. I have no faith or trust in him or his inquiry. We must be allowed to see our own files, and the cover names of undercover officers must be released," she laments.

At a February 5 UCPI hearing, core participants disgustedly deserted proceedings en masse after Mitting suggested that if spycops were married at the time of their deployments and remained married to the same person subsequently, this would indicate "they didn't deceive women into relationships while undercover". Mitting's argument is directly contradicted by known facts about a number of spycops — in some cases, such as Mark Kennedy, had a spycop's sexual relations with activists not been exposed, it's likely they would've remained married to the same people.

"It's not going to go away — and I'm not going to go away. I'm just going to get more and more frustrated, and louder and louder, and keep campaigning until I get the justice I deserve. The only person who benefits from me not making noise about this is Andy himself, so I'm never going to shut up while he remains in positions of power and trust," she concludes.

The views and opinions expressed in this article are those of the interviewee and do not necessarily reflect the position of Sputnik.