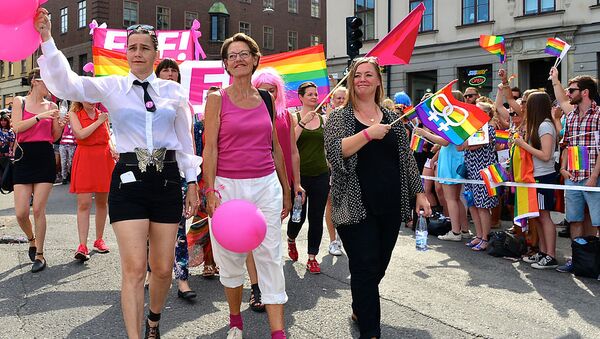 Gita Nabavi, the newly elected leader of the Swedish Feminist Initiative party, seeks to entice voters with plans to completely open the nation's borders and stop all expulsions. At the same time, the party's electoral list has drawn strong internal criticism, evoking accusations of identity politics.

During an election congress, the Feminist Initiative (FI) elected Gita Nabavi as the new frontrunner to fill the vacuum left by former party leader Victoria Kawesa, who left citing "personal reasons" after being accused of and charged with plagiarism, the national broadcaster SVT reported.

Sweden's largest party outside parliament is heading to the general election with pledges to increase taxes, reduce working hours and cut defense spending. Gita Nabavi's contribution to the party's electoral pledges is to open Sweden's borders and stop deportations altogether.

"The issues I am passionate about are shortening working time and a humane asylum policy," Gita Nabavi said during her first speech as FI leader. "Ideally, I would like to have completely open borders, so that no one gets expelled, and we are working in this direction," she added.

In an interview with the Expressen daily, she explained that having open borders was "something the whole world needed." Nabavi argued that Sweden had the means and the opportunity to give people "on the run" a worthy reception. She also added that no one should ever be deported, even killers or terrorists.

"I believe it's odd to expel people. Should we also expel people who happened to have been born here? It's a slippery slope. Why make a difference between people at all? Are not all people humans?" Nabavi told Expressen.

​Meanwhile, the Feminist Initiative's new electoral list has raised eyebrows both within and outside of the party. Apart from the party founder and former Left leader Gudrun Schyman, the rest of the list was heavy with relatively unknown immigrant politicians and representatives of various sexual minorities, whereas many key people within the party were relegated to spots of little significance or are absent from the list altogether. For instance, FI's environmental spokesman Adam Hjorth is found at spot 40, which he himself described as a "shocker." Another FI politician called it a "real purge."

"Identity is being prioritized above proven competence and expert knowledge important for the party," a former high-ranking FI politician told the magazine ETC.

Andreas Petterson, former Social Democrat who switched to FI in 2014, slammed the electoral list as "completely unserious" and a "total playground."

The FI nomination committee claims to have used an innovative "anti-racist" and "feminist" method developed by the Interfem think-tank.

Zakia Khan of the FI election committee dismissed all the reproaches by claiming that the critics were "offended white persons" with "privileges."

The Toklandet blog has suggested that the argument could signal a "civil war" within the FI.

​Formed in 2005, the Feminist Initiative is yet to make its way into the Swedish parliament. At present it polls around 2 percent of the vote and has to double its support to make it to the Riksdag. During the previous general election, the FI received some mandates in Stockholm, where some of its policies, including money on women's shelters as well as a SEK 20 million ($2.5 million) allocation for "gender-aware" and "norm-critical" education were accepted.