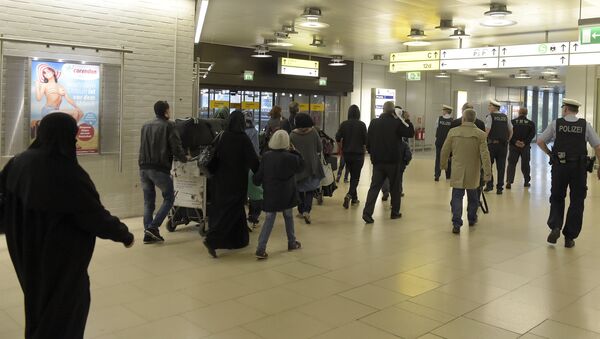 BRUSSELS (Sputnik) – Jorg Meuthen, the European parliamentarian from the right-wing Alternative for Germany (AfD) party, in an interview with Sputnik criticized the country’s authorities for allowing a Syrian refugee to illegally live with two wives in Germany, a move which has now created a precedent for other refugees to demand the same.

Over the past days, German media has reported about a Syrian refugee called Ahmad living in the northern German state of Schleswig-Holstein with his two wives and six children. The man, who is an adept of Sharia law, was allowed to bring his second wife — the mother of four of his children — to Germany despite the country's ban on polygamy.

"Germany must have gone totally insane to set this fatal precedent for more asylum seekers to claim the same. It is not for the local authorities to decide upon such cases. According to the value system laid down in the German constitution, there is not the slightest doubt over the illegality of polygamy and child marriage. It is high time to stop this by stopping [Chancellor] Angela Merkel who has disrespectfully flouted the applicable law ever since she was in power and culpably put our state at risk of failure," Meuthen said.

The Syrian refugee’s family reportedly lives solely on benefits, receiving an apartment and various forms of financial aid, including allowances for the children and free health care services.

Moreover, Ahmad reportedly received a work permit in Germany, but has chosen to stay with his children instead of finding work.

Despite the prevalence of Ahmad’s story, his is not the first case of authorities allowing polygamy for Syrian refugees in Germany. Oliver Carstens, a spokesman for the authorities of the town of Pinneberg, where Ahmad's family lives, said in an interview with Bild magazine in January that though allowing polygamy for Syrian refugees in Germany was not a general rule, similar cases were being reviewed by the authorities on an individual basis.

"would have been statutory rape not so long ago, but instead Ahmad gets to live with both wives and his six children in a two-story house in Schleswig-Holstein paid for like everything else in the illiterate unskilled unemployed refugee's life by German taxpayers" #Merkelmussweg https://t.co/YcUuFGmlvw

Many think, however, that by allowing such family reunification for certain Syrian refugees living in Germany, the country's government would de facto authorize polygamy in the country, because those migrants who will be accepted in Germany in the future would be able to claim the same rights.

Since 2015, migrants and refugees have been fleeing the Middle East and Africa to Europe due to hostilities and acute economic and humanitarian crises in these regions. Germany is among those EU states which have accepted hundreds of thousands of refugees and asylum-seekers in a bid to address the situation.

Merkel's "open-door policy" for migrants has, however, prompted criticism from those claiming that the security situation in the country had worsened due to the migrant influx. In 2017, Merkel said that she still believed her method of handling the migration issue was right, but that the crisis of 2015 should never be repeated.