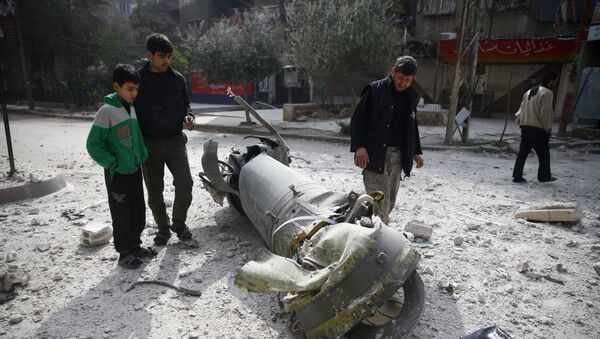 © REUTERS / Bassam Khabieh
Subscribe
International
India
Africa
The situation in the Damascus suburb of Eastern Ghouta escalated earlier this month, following the beginning of an operation by Syrian forces in an attempt to liberate the region from terrorists.

According to the official, Israeli authorities have ordered al-Nusra Front militants to instigate the situation in the Damascus outskirt so that the Syrian army becomes too busy to pay attention to alleged Israeli aggression.

At the same time, the official noted that when Israel and the US saw the hard conditions of the terrorists, they "resorted to the UN" and demanded a ceasefire "to save the militants from Eastern Ghouta."

Terrorists in Syria's Eastern Ghouta Keep Population Hostage - Kremlin
Eastern Ghouta, located east of the Syrian capital of Damascus, is controlled by Jaysh al-Islam and other armed opposition groups, as well as by the al-Nusra Front terrorist group.

The situation in the region escalated after Syrian government forces launched an operation on February 18 codenamed "Damascus Steel," in a bid to clear the region of militants. According to the Russian military, the terrorist groups in the region are intentionally struggling to escalate the situation in East Ghouta, preventing civilians from leaving the area and provoking retaliatory fights against the Syrian government.

The following day, Moscow warned that militants in the region were preparing to launch a provocative chemical attack which they planned to blame on the Syrian government, according to a report released by the Russian Reconciliation Center for Syria.