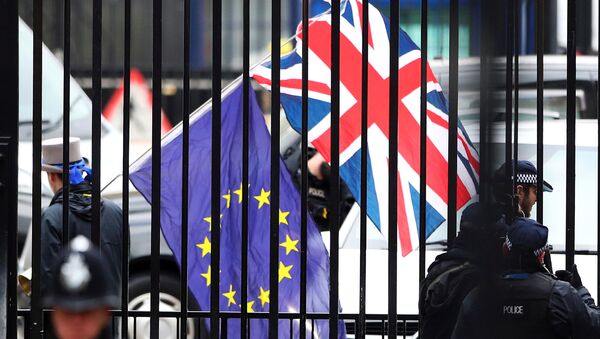 Sputnik: So today Labour party leader, Jeremy Corbyn, has stated he wants a customs union with the EU whilst still, for time being, ruling out full membership of the single market after Brexit. What are some the economic benefits of creating a new customs union with the EU after Brexit and is this step forward in creating a comprehensible Brexit strategy?

Ray: It’s a move forward in requiring clarification both from Europe and from the UK. Both Theresa May and Jeremy Corbyn originally said they envisaged accepting the result of the referendum and leaving the EU, especially the customs union and the single market — particularly Theresa May. Now, this has always raised the big issue – how does the UK engage practically with Europe after they leave the single market and in terms of pure economics there is much to be gained from having a form of customs union with Europe.

There are gains and loses… the gain is that it minimizes the disruption that will arise from the post-Brexit period falls out of “Europe”, but it does prevent the freedom to engage in other trade arrangements with countries such as America and Canada.

That was always the plan A… to leave the single market and the customs union, to negotiate some kind of arrangement but in the meantime replace what was there, with a global set of free trade agreements.

Sputnik: Labour's renewed policy on Brexit is massively significant. Not only has Corbyn managed to consolidate the party's stance on Brexit he has also opened the door to some huge problems for the government — opening the gate for Tory rebels to side with Labour to defeat Theresa May on her Brexit strategy. How significant is this move and do you think it will be effective, from Labour's perspective, in de-stabilizing the government?

Ray: There are two issues here… One of them is that Brexit has been a real issue for Jeremy Corbyn personally because by inclination he is a Eurosceptic in terms of pure democracy he’s been constrained to accept the result of the referendum which makes it difficult for the elected government. At the same time there is a lot of pressure on him to capitalize this and get a Labour government back in power, so there’s been a tension between those two types of objectives. In the end, he had to come down on one side or the other and this kind of conjuncture of politics where Labour is slightly ahead in the polls, the country is divided and Theresa May is vulnerable and you know at some stage you need to jump off the fence.

You have to accept the result of the referendum and in a sense work with the government despite it being very unpopular in some areas. This is all about power. So yes it is very significant, it’s a game changer for both parties and it points towards a change in British politics it leads to a Labour government getting back into power.

Sputnik: Whilst this is obviously a development in creating some sort of comprehensive Brexit strategy, are both the Government and the leading opposition party being too timid in their approach with Brexit? Essentially are the both the Conservatives and Labour’s Brexit approaches achievable and beneficial for the UK?

Ray: The public and the media love the theatre and the drama, which is fine but in my view it misses the deeper question that leaves both Europe and the UK asking why did we want to leave? In this instance it’s because the Europe that’s there has changed. In other words, Britain wasn’t leaving it, was leaving what Europe had become.

Europe had become highly centralized with marginal countries in particular like Ireland not counting for a lot. The power is in the center and also the concern of Europe becoming increasingly militarized. Equally the UK hasn’t asked the question of what kind of society do we want post Brexit? What kind of values do we stand around? That’s not rhetoric – Europe came into being because of a set of values and it came into being with a particular culture, a Christian culture.

These were foundational building blocks of what Europe was going to become. Both of them have fractured and now Europe is not what it was and equally it’s not clear Britain wants to be. In a sense, it’s all very well on focusing on the Brexit negotiations and of course one has to do that but it shouldn’t be done at the expense of the larger question. In a relationship of individuals and a relationship of nations, it’s all about what our common values are and where these differ, how we can help each other into a better place. That hasn’t happened.

The views and opinions expressed by Ray Kinsella do not necessarily reflect those of Sputnik.