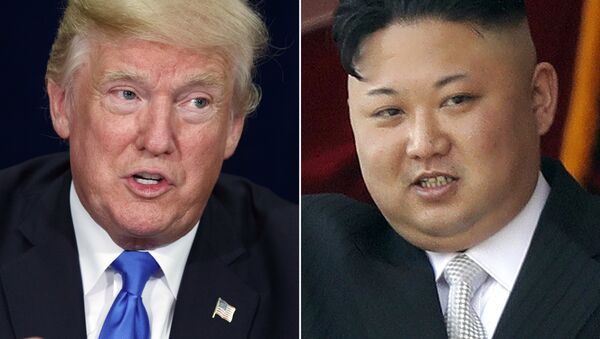 © AP Photo / Evan Vucci, Wong Maye-E, File
Subscribe
International
India
Africa
Recently, North Korea has stated that it is ready to hold talks with the US, however, Washington said that it has yet to see whether Pyongyang's move is a "first step" to removing nuclear weapons from the Korean peninsula, and pressure on Pyongyang must continue in the meanwhile.

US President Donald Trump, responding to Pyongyang's offer of talks, said that Washington is willing to engage in dialogue but "only under the right conditions." However, the president hasn't specified which conditions he has in mind.

"We have been very tough with them [North Korea]," Trump pointed out and added "we'll see what happens."

Speaking at the White House, Trump also said that China had done more on North Korea that it ever had before following requests from his administration. In addition, the president noted that a lot of goods were entering the DPRK via Russia, despite the sanctions imposed on Pyongyang.

The president's statement comes as a response to the North Korean delegation's remarks made at a meeting with South Korean President Moon Jae-in on February 25 that Pyongyang was ready to hold talks with Washington.

On February 23, the United States imposed what Trump described as the "largest-ever" sanctions package on North Korea, targeting shipments of petroleum and coal and including 27 transport companies, 28 ships and one person.