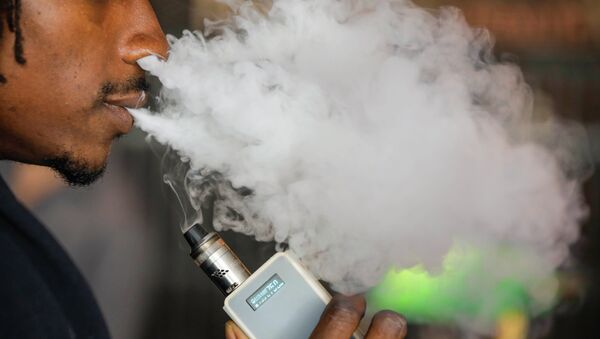 © REUTERS / Mark Blinch
Subscribe
International
India
Africa
Johns Hopkins University researchers have recently reconfirmed that there are alarming amounts of toxic metal substances like lead in the vapor released from vaping devices and e-cigarettes, which can cause cancer as well as lung, brain and heart disease.

E-cigarettes and similar devices heat a liquid into a vapor for users to inhale and exhale. Researchers at the Johns Hopkins Bloomberg School of Public Health tested the heating coils of e-cigarettes for 15 different carcinogenic metals.

Using a sample group of 56 daily e-cigarette smokers from vape shops and vaping conventions around Johns Hopkins' Baltimore campus, the scientists also tested the levels of those toxic metals in each smoker's e-liquid before it was inserted into the device, the levels in the e-liquid in the storage tank of the device and finally the amount of heavy metals in the vapor dispelled from the device.

The study found low levels of toxic metals like lead, chromium, nickel and manganese in the e-liquid of the devices prior to use, but significantly higher levels in heated liquid in the devices' chambers and in the vapor itself. Levels were so high that even the median level of lead found in the samples exceeded the safe limits determined by the US Environmental Protection Agency.

Chronic exposure to such metals have been associated with cancer as well as lung, brain and heart disease.

The scientists predict that the high levels of toxic metals can be attributed to the heating coils that turn the e-liquid into an inhalable vapor.

"It's important for the FDA, the e-cigarette companies and vapers themselves to know that these heating coils, as currently made, seem to be leaking toxic metals — which then get into the aerosols that vapers inhale," lead researcher and study author Ana María Rule said in a recent press release. "Vapers" refers to people who use e-cigarettes. "We've established with this study that there are exposures to these metals, which is the first step, but we need also to determine the actual health effects," she added.

In addition, according to medical device marketing consultant Rich Able, "The metals detected in this study have been associated with multiple adverse health effects under chronic conditions of exposure. Neurotoxins such as lead are linked to increased risk of cardiovascular and kidney disease."

"The other metals listed are even more nefarious to human organs. The strong oxidative effects of manganese can lead to necrosis [tissue death] of the mucous membrane and esophagus. Arsenic was detected in 17.9 percent of the aerosolized samples, which can lead to significant multiple end-organ damage with long-term exposure," Able added, the Miami Herald reported.

The findings from the research, published last week in the Environmental Health Perspectives journal, confirm the study conducted by the same group of researchers in 2017. Last year's study found that heavy metals were found in all five brands of e-cigarettes tested, varying by brand.

In a press release at the time, Rule wrote, "One of the things that is troubling is that the metals in e-cigarette coils, which heat the liquid that creates the aerosol, are toxic when inhaled, so perhaps regulators might want to look into an alternative material for e-cigarette heating coils."

However, research published in 2015 by Greek scientists at the University of Patras and the Onassis Cardiac Surgery Center found that the levels of toxic metals in e-cigarettes are generally below safe limits. That study concluded that "based on currently available data, overall exposure to metals from e-cigarettes' use is not expected to be a significant health concern for smokers switching to e-cigarettes' use, but it is an unnecessary source of exposure for never-smokers."

According to the US Centers for Disease Control and Prevention, in 2016, more than 2 million middle and high school students said they had smoked an e-cigarette in the last month and at least 40 percent of older teen and young adult e-cigarette users said they had never smoked regular cigarettes before picking up e-cigarettes.