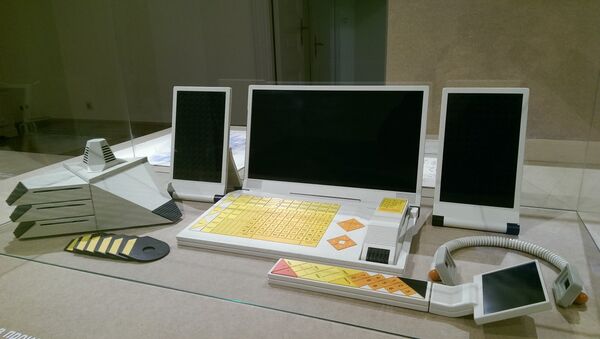 © Sputnik / Stringer
Subscribe
Ilya Tsukanov
All materialsWrite to the author
From the 1960s to the 1980s, Soviet designers created a multitude of projects which would have found themselves at home among the best technological innovations made in the US, Europe and Japan. Olga Druzhinina, director of development at the Moscow Museum of Design, revealed some of the life-changing devices predicted by the Soviets.

The foundation for the USSR's most advanced technological research projects was established in 1962 with the creation of the All-Union Scientific Research Institute of Technical Aesthetics, headquartered in Moscow and with branches all across the country. The Institute was responsible for a series of projects in the spheres of transportation, consumer goods, and perhaps most ambitiously, the SPHINX project, a Soviet vision of the smart home and smart devices of the future.

In the early 1970s, Soviet engineers were tasked with the construction of a fundamentally new fire truck. In 1975, joint work began between the Soviet side's Vneshtekhnika Institute and Sides, a leading French manufacturer of firefighting vehicles. The result was the ZIL-Sides, a futuristic design featuring improved speed, visibility and comfort characteristics, as well as ease of entry and speed of deployment for operators. 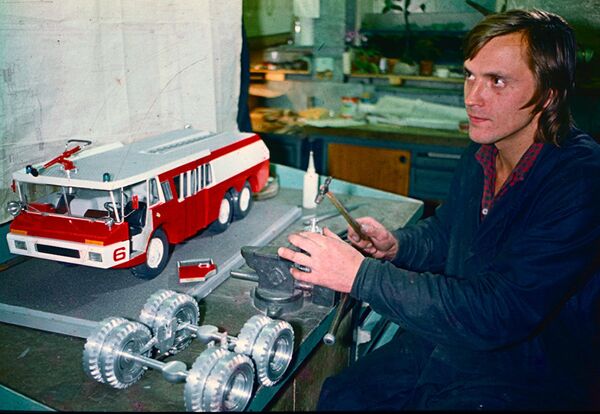 In total, three of the experimental trucks were built, two in the French city of Saint-Nazaire, and a third in Ukraine. The vehicles participated in a variety of exhibitions, and even served at sports arenas during the 1980 Moscow Olympic Games, and later in Leningrad. Unfortunately, the Zil-Sides concept proved too expensive, and never made it into mass production.

In the early 1970s, designers were asked to develop a high-speed tram capable of accelerating to up to 80 km per hour and carry 200 passengers along urban, suburban and intercity routes. In 1976, the Ural-6, a two-section prototype of a high-speed tram offering these characteristics was born. 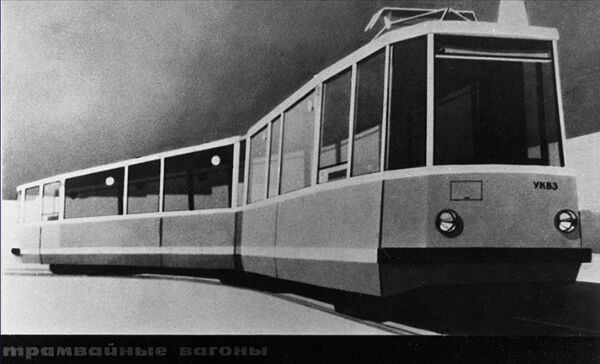 The tram was to feature an interior divided into two zones – one for those who need to exit at the nearest stop, and another for those who still have a ways to go. The project also proposed specialized heating and ventilation systems which would allow for the vehicle to be operated at altitudes up to 1,200 meters above sea level, and at temperatures between —40 to + 40 degrees Celsius (-40 to 104 degrees Fahrenheit). Like the Zil-Sides, the Ural-6 never made it into production.

In the mid-1960s, amid an outpouring of optimism over life in the future emanating from the success of the Soviet space program, the All-Union Scientific Research Institute of Technical Aesthetics began work on a project simply dubbed Prospective Taxi, a vehicle envisioned by automotive designer Yuri Dolmatovsky. In 1966, a prototype of Dolmatovsky's taxi was produced. 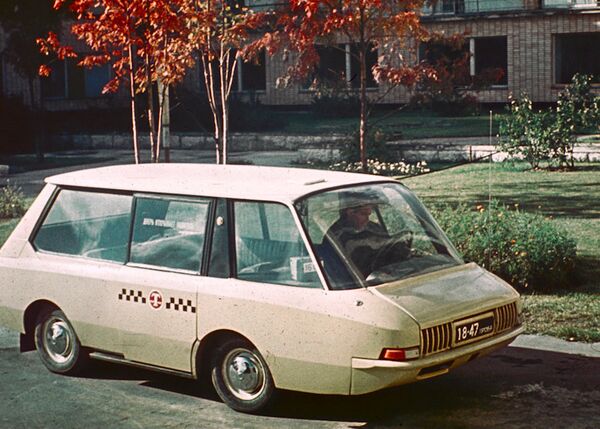 The unique vehicle featured a design which would later be found in minivans, with the majority of the vehicle's overall dimensions consisting of interior space. The Prospective Taxi was practical, with a modest 50 hp engine, roomy, compact and highly maneuverable, owing to its front wheels being set underneath the driver's seat. Among its other innovations was a sliding passenger-side door electronically operated by the driver. 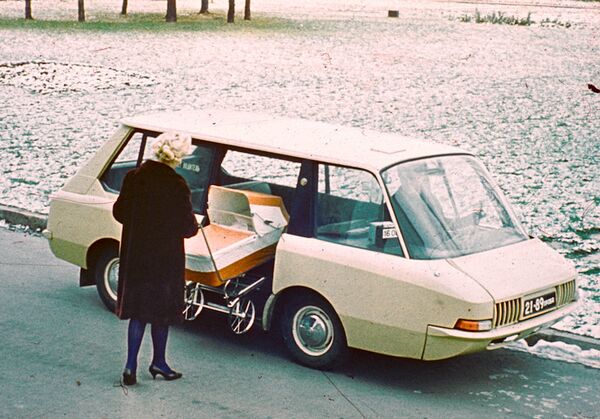 In all, only two of Dolmatovsky's taxis were ever created, with one of them even going on to serve customers in Moscow for a short period. But the project never moved beyond the prototype stage due to cost considerations and concerns over the safety of its then-untested concepts.

In the late 1970s, the Institute was given another task: to create of one of the world's first snowmobiles with a closed cabin. The cabin enclosure would greatly enhance operator comfort, subsequently allowing for greater speed of movement. The project proposed using fiberglass instead of steel for much of the body. Like the Lada Niva 4x4, the 1980-E was intended to become a comfortable mode of winter transportation for those living in northern areas. Unfortunately, the project was suspended at the design stage. 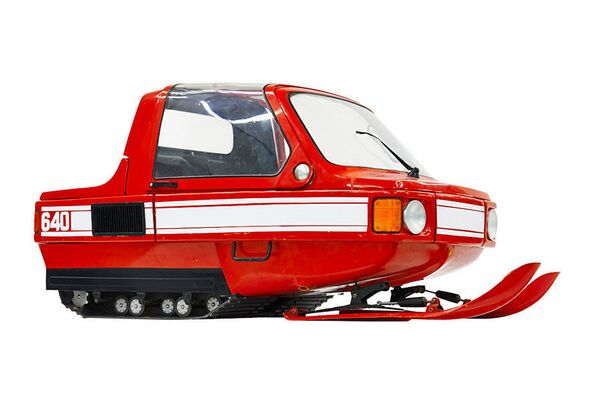 In 1986, designers unveiled the SPHINX, the Russian acronym for 'Super-Functional Information and Communications Complex', a project predicting not only contemporary ideas for smart homes, but also many of the mobile gadgets that we take for granted.

Over thirty years ago, Soviet engineers envisioned this system, meant for "for the receipt of information from all creature comfort devices in a house or apartment and their management, including in remote mode." The sleek, modern-looking system consisted of a laptop-like computer with a flat screen monitor and telephone, headphones, a larger, wall mounted visual display, rectangular table-top and spherical ceiling-mounted speakers, and a mini-tower featuring three memory blocks and proprietary diskettes, along with a remote control.

The project was divided into three categories, including devices worn by users, devices and appliances located in the home, and those attached to transport systems. The information was to be transmitted by radio signal and via telephone network.

A particularly fascinating element of the project was its prediction of a number of electronic devices we know today, including wireless headphones, optical head-mounted displays like Google Glass, smart cards, smart watches, and even a 'smart ring' apparatus.

Designers calculated that the system would become more or less practical and affordable for consumer use by the year 2000. Unfortunately, with the collapse of the Soviet Union, the project did not move beyond the prototype stage.

Also in the mid-1980s, the Georgian branch of the Institute developed a set of five modular components from which various urban structures, like kiosks, telephone booths, drinking fountains, benches and even children's sandboxes could be assembled. The project proposed the use of inexpensive, vandalism-proof materials created out of recycled materials. 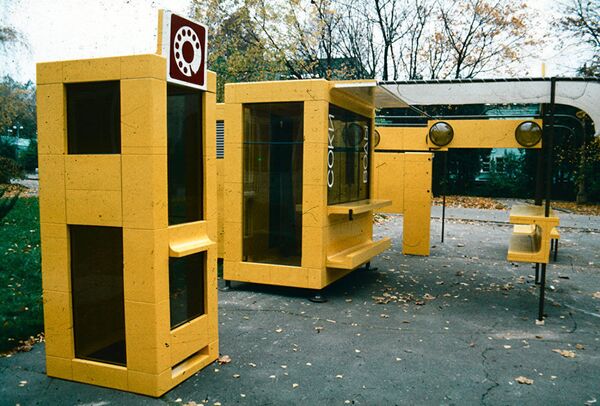 By the mid-1980s, the subway trains in Moscow and the dozen or so other Soviet cities with metro service began to show their age, with designers, including those from the All-Union Scientific Research Institute of Technical Aesthetics, tasked with outlining their vision of the metro train of the future. The fruit of their labor was the Silver Thread, a project dating back to 1987. 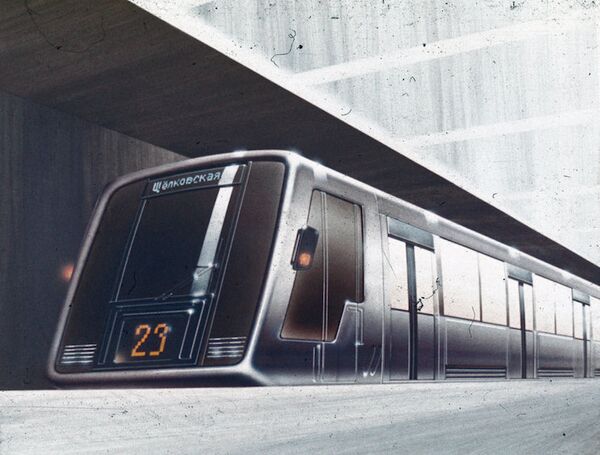 The unique nature of the Silver Thread stems from its four different rolling stock options, with designers calculating that such diversity would lead to increased comfort and carrying capacity. One of the cars would feature ample area for luggage, useful, for example, to connect the Moscow ring line to the capital's multiple train stations. Another component was the 'peak time' car, with standing-only spaces, as well as a car designed to open its doors from both sides simultaneously. Ultimately, like the SPHINX project, the Silver Thread effectively died with the Soviet collapse.