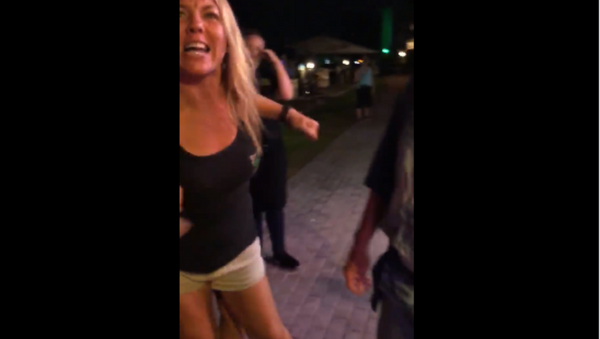 © Facebook/Orlando Ortega
Subscribe
Two employees at a Florida restaurant got into a heated fight on Saturday. And of course, it was all caught on camera by one of the coworkers.

In the video, two employees at a North Fort Myers Cactus Jack's are filmed yelling at each other. Eileen Marcinkowski is heard repeatedly shouting "You're a n***er!" at former coworker Orlando Ortega, who allegedly quit a few days before the altercation with Marcinkowski occurred.

According to restaurant owner Jane Thursfield, Ortega allegedly hit Marcinkowski in the face before she start spewing racial slurs.

"The lady in the video he actually did hit," Thursfield explained to Fox 4. "She had blood on her face, she was bleeding."

However, in the video, there is no blood on Marcinkowski's face.

Ortega has a different version of the story, claiming that he was mistreated by the restaurant a few days before the incident.

"It all started with me asking one of the owners to void off a dinner someone sent back because they didn't enjoy it," Ortega explained, NBC2 reported.

"Belligerently drunk, and he [one of Cactus Jacks' managers] just looked at me in my face and said, 'I don't know what you're talking about, you retarded n***er,'" Ortega said.

Ortega then left the restaurant, but came back later with his brother to get the money he'd earned that night. That's when Marcinkowski went off on her racial rant, according to Ortega.

"I just said I don't need this, I'm done. I dropped my stuff and walked out," Ortega explained.

"You wanted to scream and yell discriminating terms against me, now you have the attention you want. Congratulations," Ortega added.

"In the video you see him trying to get her to say something, then he actually claps. When she says the words to him, he claps and he says 'there you go, you said it.' I don't know why he would do that," Thursfield said.

"I'm not saying that what she said was right at all because we don't condone that kind of language and racism," Thursfield said.

"If it happened while they were at work, it would have been different, but they were both off work," Thursfield added.

Although police were called to the scene of the incident, no charges have yet been filed.

Other employees at the restaurant have expressed hope that Ortega would reconsider coming back to work at Cactus Jack's.

"I just feel really bad because Orlando was a really great guy and it would be great if he'd come back," said hostess Cindy Nemmers.

However, Ortega said he does not intend to try and resume his employment there. He does, however, plan on filing a discrimination lawsuit.