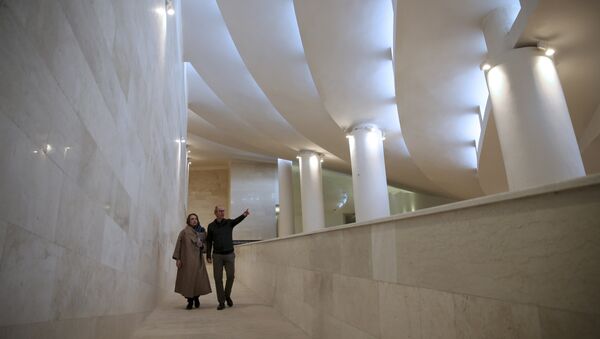 An avant-garde mosque in central Tehran which is due to be opened to the public in the next few months, lacks traditional rounded domes and towering minarets; instead, it is made of gray stone and concrete.

An editorial published on the non-governmental Iraqi news website Mashregh has accused the authorities of "treason" for approving the construction of the avant-garde Vali-e-Asr mosque in Tehran.

The article claimed that the curvature of the mosque resembles that of a Jewish yarmulke and that the building's "completely neutral" design allegedly betrays an "atheistic approach." Yarmulke, or kippah is a small cloth cap worn by Jewish males.

One of the architects of the mosque, Reza Daneshmir, in turn explained that they had decided to opt for a modern design of gray stone and concrete instead of constructing traditional domes and minarets.

Fluid Motion Architects' Vali-E-Asr mosque in Tehran stirs controversy as it has no minaret or dome: https://t.co/bQcAskj2xj #tehran pic.twitter.com/6GK4o90F2E

According to him, Tehran's city officials first said the building did did not resemble the conventional form of a mosque, and that "it couldn't be done".

"I explained who the real audiences of this mosque are [and] I finally succeeded in persuading them. We wanted it to be an avant-garde project, not a conservative and backward one," Daneshmir said, in an apparent nod to young Iranians who are the Vali-e-Asr's permanent frequenters.

Located in a popular shopping area near Tehran University, the 25,000-square-meter (270,000 sq. feet) Vali-e-Asr mosque includes its own library, reading halls, classrooms and an amphitheater.

A whopping 16 million dollars was allocated for the 10-year construction of the mosque, which is scheduled to open its doors to the public in the next several months.