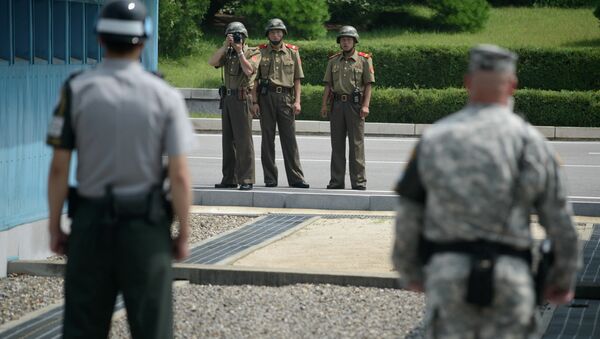 © AFP 2023 / Ed Jones
Subscribe
International
India
Africa
A delegation from North Korea has stated that Pyongyang would be "very willing" to hold talks with Washington in a bid to ease the ongoing tensions on the Korean Peninsula. With the South Korean president echoing these sentiments, it is now largely up to the US to take matters further.

Sputnik spoke with Youngmi Kim; lecturer in Korean Studies at the University Of Edinburgh to get her view on the situation.

Sputnik: Do you believe that talks between North and South Korea; should they take place, would be succeseful?

Youngmi Kim: It’s a very divided opinion, but I think it actually will ease tensions because a few months before the Olympic Games, tension was extremely high and people were beginning to ask whether a war will break out or not. Now with the North Korean athletes coming down to South Korea, progress has been made so I think this is a good start.

Although there has been criticism of the South Korean government for being stubborn with the North, with many arguing that the North will never give up its nuclear programme,  I don’t see any other option apart from beginning discussions. To some within the US and South Korea it sounds more like a South-South conflict than a North-South conflict, because many South Koreans are divided over the Korean-US alliance and over the containment or engagement policy towards North Korea.

Youngmi Kim: I think China’s role is very important because in a way China’s sanctions worked to bring North Korea to come to the table and talk. At the same time, they are trying to implement a two sided strategy, pressuring North Korea with sanctions whilst being one of the only countries supporting the North Korean regime.

China has traditionally been harsh towards South Korea’s economy, but now they are easing the tensions between each other, so if China, the US and South Korea all had an identical policy towards North Korea, it would be much better for the region.

The views and opinions expressed by Youngmi Kim do not necessarily reflect those of Sputnik.