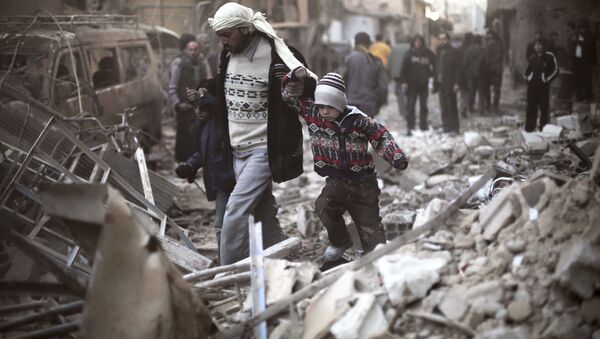 © AP Photo / Save the Children
Subscribe
Amid a 30-day ceasefire in Syria agreed upon during Damascus’ anti-terrorist operation in East Ghouta, Russian and Syrian top officials have commented on the situation in the war-ravaged country.

Moscow Concerned With Escalation in East Ghouta Despite UN Resolution

Russian President Vladimir Putin held a briefing on Monday with the permanent members of Russia's Security Council to discuss the situation in Syria's Eastern Ghouta and the continuing provocations by terrorists in Syria, Kremlin spokesman Dmitry Peskov said Monday.

Earlier in the day, Peskov said that the dire humanitarian situation in that area had been addressed by the Russian president in a phone call with his counterparts from France and Germany that was held on Sunday.

"The situation in Syria… causes extreme concern. The terrorists who are in East Ghouta, do not lay down their arms, they keep the local population hostage, and this is the reason for the very tense situation," Peskov said.

Putin on Sunday talked about the situation in East Ghouta with French President Emmanuel Macron and German Chancellor Angela Merkel by phone. The heads of the three countries agreed to continue "joint, constructive work" to ensure the implementation of the truce deal.

The phone talk came after the UN Security Council unanimously adopted resolution 2401 on Saturday, urging all parties to the conflict to immediately stop all clashes and adhere to a long-term humanitarian pause on the entire territory of Syria in order to ensure the safe and unhindered supply of humanitarian aid as well as medical evacuation of those injured. 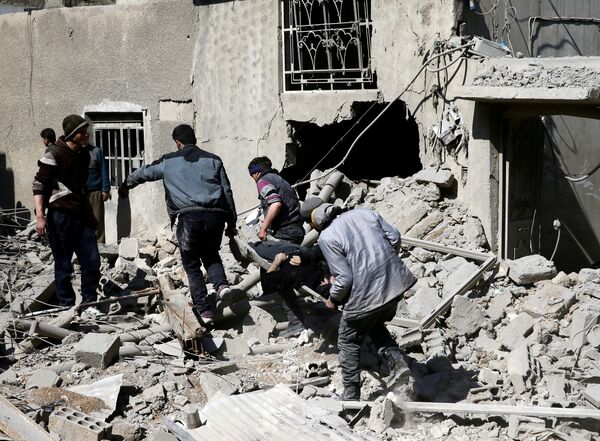 People carry the body of Majid Santiha on a stretcher in the besieged eastern Ghouta town of Hamouriyeh near Damascus, Syria
© REUTERS / Bassam Khabieh/File

Lavrov: US Keeps Working to Establish Qausi-State in Syria

Speaking on the Syrian issue at a press conference on Monday, Russian Foreign Minister Sergey Lavrov has touched upon the reports of alleged chemical weapons use, saying that they aim to derail ceasefire agreements in Syria.

"There has already been disinformation in the media that last night or this morning chlorine gas was used in Eastern Ghouta as a toxic substance, citing an anonymous individual who lives in the United States … Other disinformation is likely," Lavrov noted. 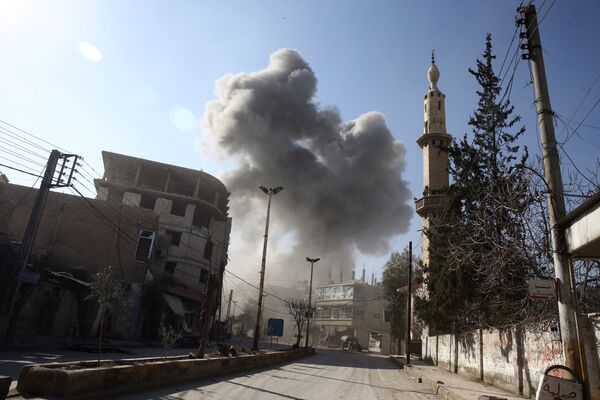 "Attempts from such sources will, of course, continue for the sole purpose of denigrating… the government forces, accusing them… of war crimes in order to implement consistently those actions that we already observe in the eastern regions of Syria, where the United States is implementing, I am convinced, the scenario of creating a quasi-state, the scenario of a split of Syria," he added.

The Russian foreign minister the UN resolution 2401 stipulates that ceasefire would begin when all sides agree on its nature.

"Does this resolution have a chance to be implemented… Overall, yes – such chance exists if all Syrian sides on the ground, all those who support them, including outside of Syria … if all of them are guided by the UN Security Council’s demand to cease hostilities to ensure at humanitarian pause of at least 30 days," he told a press conference.

"We made it clear that this resolution is valid for the entire territory of Syria, including Afrin and territories where the US forces are deployed. The second aspect is that the resolution is not applied to the actions against Daesh and Nusra Front terror groups, which means that operations against these groups are not prohibited," Syria's Permanent Representative to the United Nations in Geneva Hussam Edin Aala has said.

The representative has also noted that the Syrian government forces are conducting the operation against aforementioned terrorist organizations in the country, including in East Ghouta.

Turkey to Deploy Special Forces to Syria's Afrin - Deputy PM
This comes as UN General Secretary General António Guterres and UN High Commissioner for Human Rights Zeid Ra'ad al Hussein praised the adoption of the UN resolution 2401, which envisages the introduction of a ceasefire regime throughout Syria for 30 days. Guterres and Al Hussein underscored the importance of cessation of hostilities in accordance with this resolution, primarily in East Ghouta.

Syrian government forces have been carrying operation codenamed “Damascus Steel,” in a bid to clear the region of militants. According to the Russian military, the terrorist groups in the region are purposely struggling to escalate the situation in East Ghouta, preventing civilians from leaving the area and provoking retaliatory fights against the Syrian government.

000000
Popular comments
Surprising -- a bit of light on what's really happening in Syria, coming from an unexpected source ... Syria’s tragedy, America’s crime: The collapse of national sovereignty www.salon.com/2018/02/25/syrias-tragedy-americas-crime-the-collapse-of-national-sovereignty/?utm_ref May God stay Russia and Syria et al, in their indomitable fight for what is right and just and in defence of International Law-- to uphold, respect and recognise the sovereignty and territorial integrity of all nation states -- in this instance, that of the Syrian Arab Republic's.

choticastile
26 February 2018, 15:04 GMT
000000
michael,, There is no way Michael, that any decent upstanding and caring human being, should not care for the ghoulish hell being visited on Syria and her peoples. The US and its so-called allies and the bands of terrorist butchers they support-- long since common knowledge, yet covered by western media lies -- bring shame on humanity, for the wanton atrocities they are condoning to continue happening in Syria. If International Law was operating by the book-- as it should-- these horrific acts would be condemned for the war crimes they are.