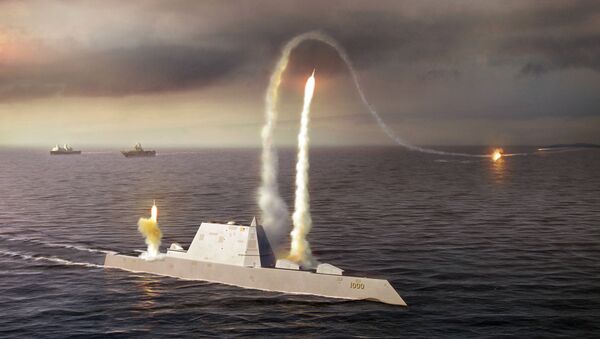 CC BY-SA 2.0 / Marion Doss / 080723-N-0000X-001
Subscribe
As US military strategists reconsider what will become of the $22 billion Zumwalt-class’ three ships, one of the possibilities on table is arming the destroyers with nuclear cruise missiles, Military.com reports.

The US government's Nuclear Posture Review calls for the development of new, small-yield, sea-launched cruise missiles (SLCMs), but the weapons need not necessarily be added to a submarine's weapons bay.

When pressed further, Hyten said, "we want to look at a number of options — everything from surface DDG 1000s [Zumwalt destroyers] to submarines, different types of submarines… that's what the president's budget has requested of us, to go look at those platforms, and we're going to walk down that path."

The Zumwalt program suffered a high number of technical issues and cost overruns that ultimately led to its cancellation. Instead of getting 32 ships as the original acquisition plans called for, the Navy will receive just three Zumwalt-type ships, unless Congress revives the program with fresh cash.

The US Navy's 2019 budget request states that the service decided to "refocus the primary mission of the Zumwalt-class destroyers from land attack to offensive surface strike." The 2019 budget requests $89 million for arming the ships with long-range SM-6 missiles, for use against air or sea targets up to 250 miles away.

000000
Popular comments
They are so smart, they know how to walk down a path. Maybe with luck the path will lead to nuclear oblivion.
dvdgrg09
27 February 2018, 01:58 GMT
000000
Dear US Navy, first of all consider choosing an identical shape for the topside and the bottom of those destroyers in order to make any capsizing less visible ;-)